Maintaining The Mission Of The Waikiki Roughwater Swim 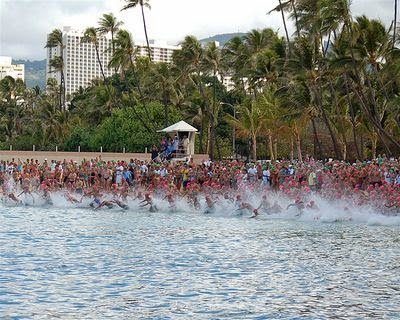 “Come to the meeting,” asked Jim Anderson of the Waikiki Roughwater Swim Committee.

I had a pretty good inkling what I was getting into back in the mid-1980’s, but I was young and had enough time on my hands. I was not born in Hawaii nor was I a long-time resident kama’aina, but I was very interested in meeting new people, making new friends, especially swimmers and ocean-goers.

As a life-long ocean swimmer, I had always heard of the iconic Waikiki Roughwater Swim, but I had never actually seen the 2.4-mile point-to-point ocean course across Waikiki Bay on Oahu.

So I started to swim the course myself on the weekends. One Saturday, standing on the Kaimana Beach, the traditional start of the swim, I noticed a group of obviously fit masters swimmers checking out the course and then taking off. The mix of men and women was a kind of group who you knew were familiar with the ocean. As they were standing onshore applying sunscreen and stretching, they were pointing out to the horizon. Even though I was out of earshot, it was clear they were making plans for their swim course as they surveyed the ocean conditions.

I smiled and thought, “Cool, I’ll just follow them.”

But something inside me suggested to not disturb them so I hung back and watched them get 50-100 meters offshore. Then I took off, trailing the pod of ocean swimmers as best I could. Little did I know the capabilities of this group that included Mike Miller, Ian Emberson, Doug Rice and Rick Heltzel. As luck would have it, these were the crème de la crème of the local ocean swimming scene in the 1980s. Miller had done the Molokai Channel and would go on to complete the English Channel, Catalina Channel, Manhattan Island Marathon Swim, END-WET, Maui Channel and many others. Emberson had also done the Molokai Channel and 1982 Ironman Triathlon and is the long-time race director of the Maui Channel Swim. Rice was the first person to swim from Lanai to Maui and did all kinds of other ocean events and Heltzel won the Hawaiian Christmas Looong Distance Invitational Rough-H2O Swim over 12 times and was the record holder for the Waikiki Roughwater Swim. It was an esteemed group – the quartet together with the wives were young, fit and adventurous.

Without guidelines and few predecessors, their vision of what could be done athletically in the ocean was inspirational. As they kindly accepted me with a warm aloha spirit, I was enthralled by their spirit of adventure as we took all kinds of courses around the perimeter of Oahu, but I was also wizened by their attention to detail and knowledge of the marine environment.

Through their introductions, I met the venerable Jim Anderson who would later be inducted into the International Marathon Swimming Hall of Fame and race director for the first FINA Open Water Swimming Championships.

So I went to my first Waikiki Roughwater Swim Committee meeting and literally met the Who’s Who of ocean swimming in Hawaii, from Fred Trask to Steve Bobko and Alan Hong. Stalwarts and passionate people all. They worked behind the scenes to make sure the Waikiki Roughwater Swim stayed true to its mission: to conduct a safe event on Oahu that encouraged locals and visitors to challenge themselves in a swim across its most famous bay.

I threw myself into the group dynamics with gusto. These people were engineers, lawyers, dentists, marketeers, city employees, Olympians, and teachers, but they were all drawn together by their love of ocean swimming. They could have asked me to do anything and I would have done so as I held each of them in such high regard.

After the first year of volunteering, I was asked to take the helm by Anderson and thought, “What a great opportunity to help elevate the event…” So we increased the spotters, high-powered binoculars, and radio communications on the top floors of the tallest hotels that lined Waikiki Beach in order to more quickly locate swimmers in distress. We worked closely with Ralph Goto, Kenny Rust and the rest of the Ocean Safety and Lifeguard Services Division. We rented school buses and enabled people to park at the finish and be bused to the start. We provided some towels on the seats of the buses so people could wipe off the sunscreen and skin lotions that might get on their hands and goggles before the race. And we set up a sister swim relationship with events in Australia.

And we made sure that all our volunteers were well fed and received cool t-shirts.

Pay attention to the details. Those were the expectations that Anderson had focused on and what he instilled in me.

Enjoy the ocean, but be safe. Those were the assumptions that Miller, Trask, Hong, Goto, Emberson, Rice and Bobko inspired me to uphold.

Keep true to the mission. That was the standard that founder Jim Cotton set for all of us: keep the classic and dramatic course to that far distant shore, have a community swim that is welcoming to all including especially recreational swimmers, and have one major theatrical race to showcase Hawaii.

Those three fundamental principles: (1) pay attention to the details, (2) enjoy the open water but be safe, and (3) keep true to the mission are continued to serve me well throughout the last several decades in the open water swimming world.