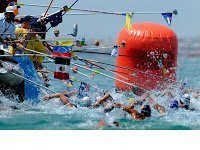 At the recently held FINA Bureau meeting in Bangkok, Thailand, there were numerous major decisions discussed and approved by the most important group of decision-makers in aquatic sports (pool swimming, open water swimming, diving, water polo and synchronized swimming) for its 202 member nations.

In other decisions that impact open water swimming, FINA decided the following:

o FINA will investigate the introduction of a ‘biological passport’ for athletes within its anti-doping program
o FINA will conduct a re-analysis of the samples collected at the 2009 World Swimming Championship to search the presence of plasticizers
o FINA will consider the possibility to store the drug-testing samples collected during FINA World Swimming Championships for future analysis for a minimum of 8 years
o FINA will launch of a FINA Coaches’ Educational Programme in addition to its existing FINA Development Programme
o FINA will consider expanding the FINA Swimming Coaches Certification Programme to open water swimming
o FINA will host a FINA World Aquatic Convention and Exhibition in September 2010 in Punta del Este Uruguay for its 202 member federations
o Masters, both in the pool and open water, must abide by the same rules and deadlines as the elite swimmers.

The FINA Bureau consists of 22 elected members with 7 members from the world at large and fifteen on the basis of geographical representation (3 from Africa 3, 4 from the Americas, 3 from Asia, 4 from Europe and 1 from Oceania). The 22 members must be of different nationalities. From among these 22 members, the Congress elects the President (Dr. Julio C. Maglione) and 5 Vice Presidents (Nory Kruchten of Luxembourg, Bill Matson of New Zealand, Dale Neuburger of the USA, Sam Ramsamy of South Africa and Husain Al Musallam of Kuwait), each representing a different continent. An Honorary Life President, the Immediate Past President, the Immediate Past Honorary Secretary and the Immediate Past Honorary Treasurer are also members of the Bureau, but without vote.