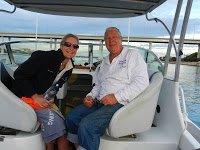 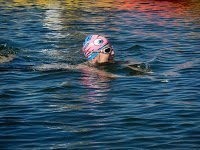 It is highly unusual to see a swimmer in the Dawesville Cut. In fact permission is required to use this waterway, so the afternoon fishermen were surprised to see this occurrence.

Little did they know what they were witnessing. But one fisherman called out across the water, “Hey what’s going on?” He almost dropped his stubby of beer when he deciphered the hand signals which indicated this swimmer was about to complete her 30 km swim around the whole Halls Head Island.

Jennifer Hurley achieved just that in the first official long distance swim around this man made MandurahIsland, which she completed in 9 hours 6 minutes 52 seconds.

The endurance distance swimmer is no newcomer to long events. Her resume includes crossing the English Channel, three Rottnest solos, the Irish Sandycove Island swim, a record double English Channel swim in a team of five and many other endurance swims.

This modest Mandurah champion, enthusiastically supported by her Irish husband Mick and her biggest fan, was very well prepared for the swim. The course required expert evaluation to accommodate the vagaries of the course. Ocean currents, prevailing winds, Estuary tides and turning currents all needed to be fully researched, as one mistake would mean an impossible task of swimming against a 5 km per hour current.

Barbara Pellick, a renowned marathon swimmer from Western Australia, assisted Jennifer in her training and preparation. She also organised the official ratification of the swim with the Open Water Association. Husband Mick Hurley spent months studying tide charts to calculate the best starting point to bring the whole event together. With the support of experienced local and boating expert Des McLean, the course was plotted and successfully accommodated all the tide changes.

It was a long day in the water. The team decided to leave a few days earlier than planned when a big low pressure system was threatening to spoil their chances.

The starting point was a small beach near the Dawesville Cut ocean end. In a very clear ocean which abounded in bait fish and many species, Jennifer made good time along the coast to the Estuary Inlet. Spectators on the hourly Dolphin cruise boat were treated to a history making swim which was taking place in front of them around midday as Jennifer made her way under the Old Traffic Bridge and towards the Peel Inlet. Around this landmark a dolphin and her calf joined Jennifer which provided an adrenalin rush which helped her keep going. She had about 14 kilometres to go.

The long, landscape lonely section of the Inlet swim passing inland Falcon and Cox Bay was the most difficult part of the swim. There was some relief with many robust crabs and numerous huge stingrays, along with schools of fish in the sparkling water to observe, but after swimming her rhythmical, steady freestyle stroke for over 6 hours now, fatigue was taking its toll. As the evening clouds darkened the sky, a welcome drink break announcement declared the channel leading into the Dawesville Cut was just 300 metres away.

This lifted Jennifer’s stroke rate and she welcomed the slight following current as she moved into the ‘Cut’.

A small cheer squad of fishermen witnessed her pass under the high bridge and on to the finish at the Ocean end. A lady jogging with a pusher on the cycleway above the beach was the only land based witness to this amazing achievement. She probably still doesn’t know what she witnessed, but she was alerted to the yelling and cheers from the support crew on the water, and from a scream of delight from Jennifer as her feet met the welcome beach sand.

After having completed the 30 km swim, Jennifer had so swim back out to the boat, where a happy crew returned to the Dawesville boat ramp, the memory of this historic swim etched on their collective minds. Jennifer, cold, quiet but inwardly ecstatic, sat rugged up next to the skipper’s chair, happy to have achieved her goal. 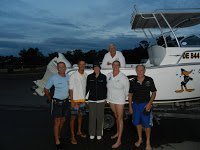 The first swimmer ever to have swum 30 km around Halls Head Island, Thursday April 26th, 2012.

Background Footnote: Hurley got hooked on open water swimming in 2006 doing a 1.1 km dash from Union Hall to Glandore in West Cork. That same summer, she was one of 93 swimmers from Ireland who completed the South End Rowing Club Alcatraz swim. She then quietly started knocking off longer distances. By 2009 she hit the cold open water in Cork, Ireland with a passion and did a 13 hour 58 minute English Channel solo swim at the age of 38. This February she completed her 4th solo Rottnest Channel Swim and established an open water swimming group in 2011.