Marcos Díaz continues to make his way around the world, making friends at both the highest political levels and at the grassroots.

Marcos Díaz arrived last week in Rabat, Morocco in preparation for his third continental crossing from Africa (Morocco) to Europe (Spain) across the Strait of Gibraltar (Morocco to Spain).

As usual in all of his swims, Marcos and his team spent time doing social work, visiting governmental authorities and giving interviews. 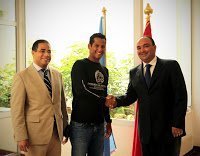 The local media – on both sides of the continental divide – continue to showcase his goals and his incredible charisma that draws many to support the swim.