The first race is the 5.2 km Traversata dello Stretto with the longest history and a difficult course across the Strait of Messina. 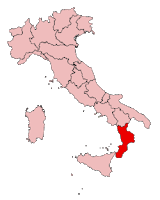 First crossed in 1930, the Strait has strong currents and natural whirlpools that make for a challenging and enjoyable event to do and watch, especially on a clear day. The Traversata dello Stretto starts at Torre Faro, crosses the Strait of Messina to a turn in Cannitello in Calabria on the Italian mainland, then traverses along the Italian coast and finished in Villa San Giovanni.