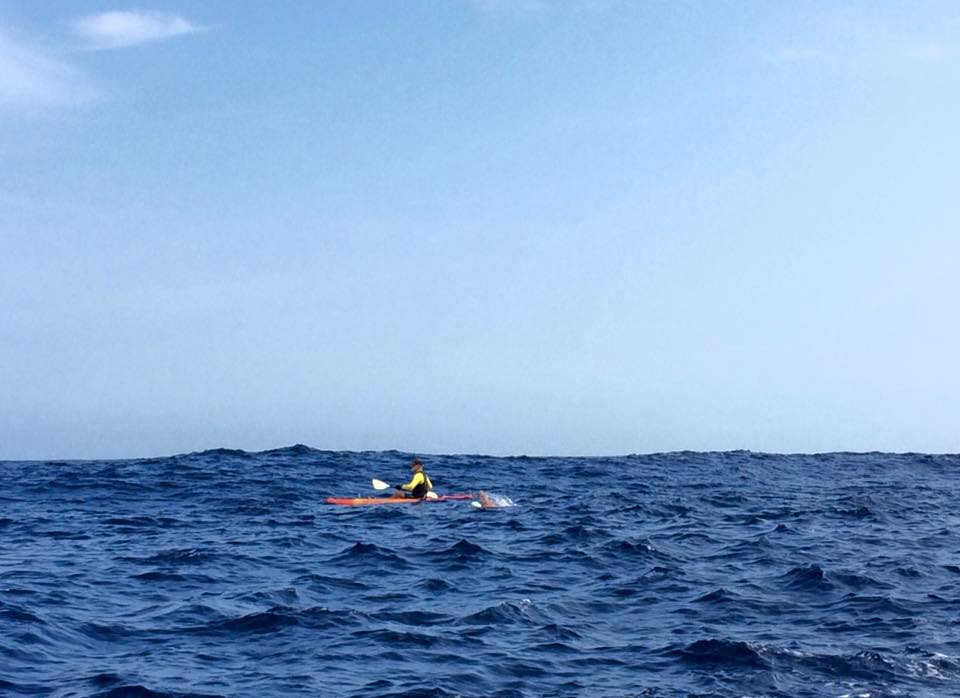 But he faced some big seas and massive swells along the way.

“For years, Jeff Kozlovich, Mike Twigg-Smith and I have been escorting swimmers on their Kaiwi Channel attempts. The three of us have had extraordinary success assisting swimmers on their goals partly because of all the small details we obsess over like weather, tides, etc., but also because the sheer determination and motivation of these swimmers migrates into our heads and bodies.

These migrations are from attitude, motivation and willingness to achieve their goals. When we see them push harder in difficult times, we do the same and vice versa. It is a silent bond between the swimmer and his/her crew that speaks volumes and creates success stories. We are not just kayakers and boat captains, we are part of the crew. We ask something difficult out of the swimmer – to put their full faith and confidence in us in order to provide the safest path across the uncertain, the raw, the wild, and the unpredictable Kaiwi Channel.

Upon our pre-swim meeting a few days prior was when I first met Antonio Argüelles, Nora Toledano (his coach and world-renowned swimmer), and Ariadna Del Villar Morales, his physician. Brad Howe, his long-time friend, also met us at the airport.

Immediately, you can feel Antonio’s charisma. He was constantly smiling, jovial, and excited while he retained full confidence in his crew. He was well researched about Kaiwi and did his due diligence about the channel, even knowing what he did not know – which is where we come in. It would have to be impossible to not like this guy and the people who surround him. They are all happy, thoughtful and totally aligned on the challenge set forth. These are the type of people you can crack beers with all night and have stomach pains in the morning from laughter. They set the pace and we joined in – the team was complete.

2016 has been a hard year on Kaiwi attempts. With the El Nino weather, Hawaii has been slammed with giant waves all winter. While the tide, weather and winds seemed to be in alignment for a Monday crossing, the above surf advisory swell (greater than 25 feet) from the weekend was dropping quickly, but not quickly enough. Our normal start of Kaluakoi could have waves, big waves. Jeff, Mike and I, knowing Molokai and the channel better than any other swimmer’s crew, decided it was good to go and we had alternate plans in the mix. We alerted Antonio and his crew to make the final call. They put their faith in us and we booked flights and headed over Monday early afternoon on the last available flights to Molokai.

Upon reaching the island, our shuttle grabbed us on time and we headed to Kaluakoi for a peak. It was a beautiful day for epic surf . As surfers, Jeff and I were drooling on the 4-5 feet (7-9 feet face) waves (see here with our 32-foot boat in the background). The waves had completely washed away the beach where there was a 2-3 feet rock to jump off to be greeted with pounding shorebreak – a surfer’s dream and swimmer’s nightmare. We contacted Mike on the boat and kicked in our alternate plan.

We headed to southwest Molokai remote and deserted port of Haleolono to greet the boat and get in. We immediately departed to seek a starting point and had some ideas in mind already from past research. Our start was a pristine beach, fully protected from the swell with a soft entry and exit and short distance to Laau Point. By the time the anchor dropped, Antonio was already in his swimsuit and his team was lathering him up. 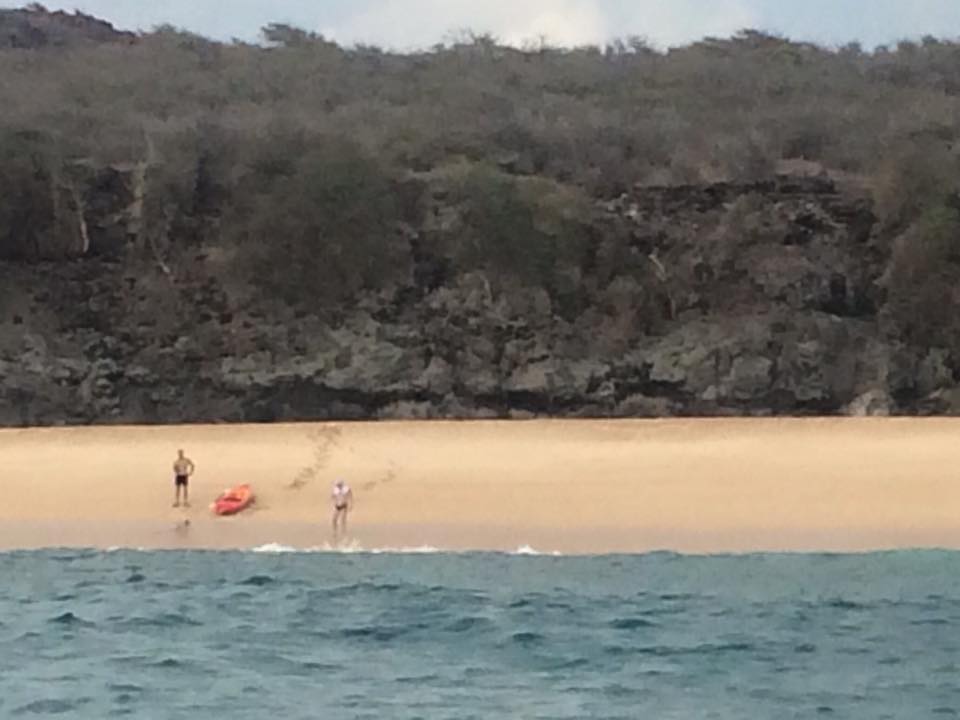 Argüelles at start on Molokai.

We could hear whales sounding in the water. No hesitation – this was our moment. With a smooth start at 3:07 pm on Monday, I jumped in the kayak and lead Antonio to the channel. Right at Laau, we were greeted by humpback whales about 50-75 feet from us tail slapping and fin slapping what seemed to be a message to Antonio: All will be good, just swim.

We were inspired because Antonio and his crew attitude never wavered. Always happy, always ready and always stoked.

13 + hours later, the moonrise over us provided a beautiful night with full visibility and overall very nice weather. Night, then day, broke to a gorgeous sunrise over Molokai now in our distance with Oahu approaching. We continued onward.

Just before Oahu, the Kaiwi Channel goes from very deep to somewhat shallow shelf that tides can make a difference on. The conditions change here as the waves stack up and the morning winds turned on. After a 2-hour shift, we literally made no progress. He was swimming in place and the tides were against him. He never gave up and never showed weakness. 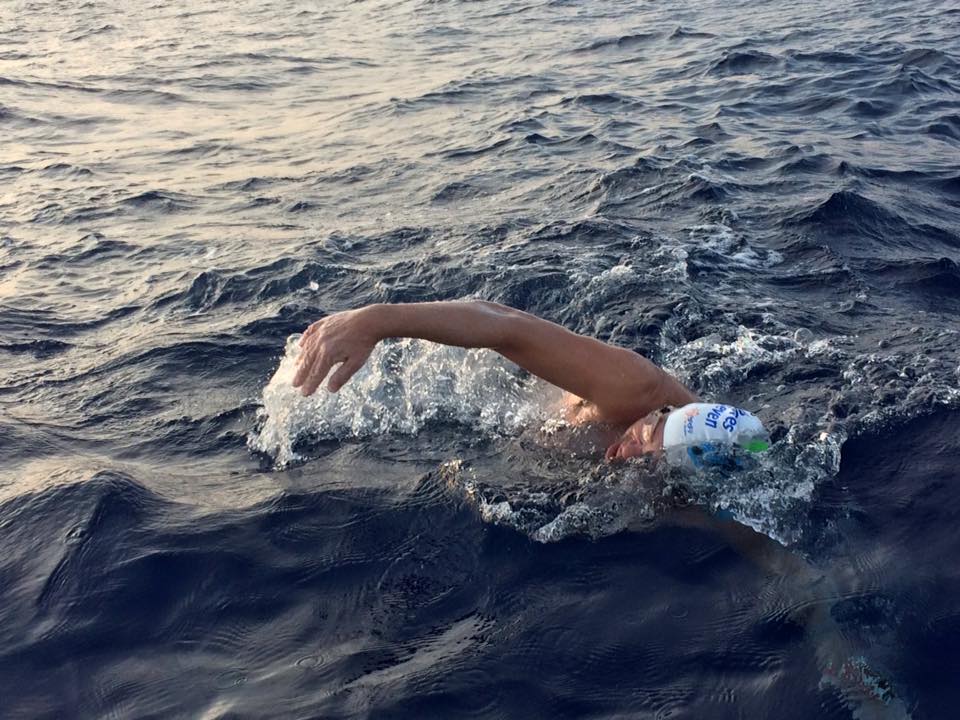 The tide shifted, Captain Mike worked to adjust our course and Antonio hit the throttle. He continued over the shelf and made it within eye view of Sandy Beach where his wife and daughter were there to greet him. Jeff got out of the kayak and put his fins and goggles on to swim Antonio in. I grabbed a surfboard to get to the beach to mark his final time. The shorebreak was rough, but at this point, nothing could stop Antonio. He casually swam through it with Jeff calling the waves and ran up to dry land after 23 hours and 18 minutes. His family was there and stoked. His crew was stoked.

There are moments as Kaiwi guides and captains when we wonder why we do this.

It is an honor to work with these people and to have a front row seat with them.”

For more news on this crossing, visit here. For more information on his Oceans Seven (Siete Mares) journey, visit here.