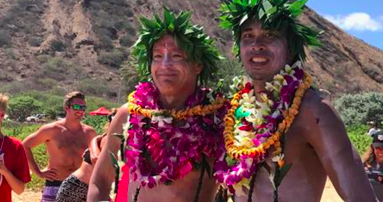 Ryan Leong, Stefan Reinke and Mark Williams attempted a swim across the Molokai Channel from Molokai to Oahu, they aborted their tandem crossing due to the presence of a tiger shark.

Leong and Reinke made another attempt the following week, finishing in 19 hours 32 minutes on September 4th.

“It was the longest night of my life. We started our swim at 6 pm, swam through the night and saw sunrise.,” said Leong.

Reinke talks about their experience on the Molokai Channe:

Daily News of Open Water Swimming: Can you describe your first attempt at the Kaiwi Channel?

Stefan Reinke: Our first attempt turned out to be a huge disappointment as we thought we were on track for a good swim. We were in the water for almost 8 hours.

Daily News of Open Water Swimming: About what time did you see the tiger shark?

Stefan Reinke: We had three swimmers, Mark Williams, Ryan Leong and myself. We had two kayakers in the water. We were getting a good push from the swells. I was following my mantra for the day: pace and patience. About 5 minutes after a feed (a bit over 7 hours into the swim) the escorts started blowing the whistles and told us to get closer to the kayaks as there was a shark in the water.

Daily News of Open Water Swimming: Who saw the tiger shark first? What did the swimmers/crew do?

Stefan Reinke: Mark had spotted the shark a few minutes before, but did not say anything as the shark seemed to be just passing by. When the shark came back, Mark alerted the escorts. We huddled for a moment. I saw the shark to the right of us. It was clearly a tiger shark.

After a brief pause we began swimming again. Roughly 25 minutes later as we were approaching our next feed we discovered that the shark was trailing us. This time she was about fifteen feet behind us and ten feet below the surface. After huddling a second time we were pretty much agreed to keep swimming when we noticed her again circling below us, only this time much closer. We were able to get a gauge on the size (10-12 feet) when she swam about five feet under one of the escort kayaks. Ryan was the closest to her – he could have reached out and touched her with a small stretch. He later told us that she was wider than the kayak. At that point we decided to abandon the attempt. It was an absolutely miserable ride back to Oahu on the escort boat.

Daily News of Open Water Swimming: How soon after you got out of the first attempt, did you start planning for the second attempt?

Stefan Reinke: On Wednesday, two days after the first attempt, Ryan and I discussed the possibility of trying again. The next day we made the decision to do it that week end over Labor Day. I was committed to swim the Maui Channel relay with Bill Goding’s team on Saturday, so we decided to go on Sunday night.

Daily News of Open Water Swimming: What was your mindset on the second attempt?

Stefan Reinke: We were confident that we had done the necessary training and that the first attempt did not take too much out of us physically. We were both a little mentally fatigued, but we never doubted that if we started we would have the chance to finish. There are so many variables in OWS that you cannot control, so we simply focused on what we could control. Frankly, I barely even thought about sharks before or during the swim. I was much more concerned with swimming through the night and hypothermia.

Daily News of Open Water Swimming: If you had seen another shark on your second attempt, what would you have done?

Stefan Reinke: We would have kept swimming as long as we thought it was safe. There is determined, stubborn and stupid. I am guilty of all three on occasion; however, I would like to think that I can make good judgments when necessary.

Daily News of Open Water Swimming: As an attorney, what would be your legal advice to someone who was bitten by a shark on a channel crossing?

Stefan Reinke: If they walked into my office with the thought of blaming someone else for their misfortune, the exit door would hit them in the ass faster than a Simone Manuel 50-yard free. That said, another lawyer might want to explore the circumstances of the incident to determine if someone else might be in part responsible. I suspect I could conjure up some hypothetical scenarios) where there might be third party liability (beyond the beast), but then again, that would also be the type of case I would like to take to verdict with a jury.