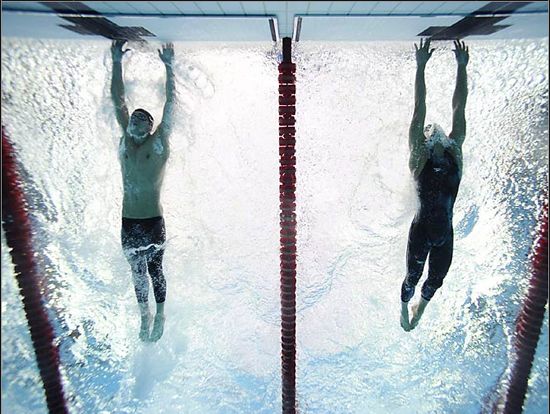 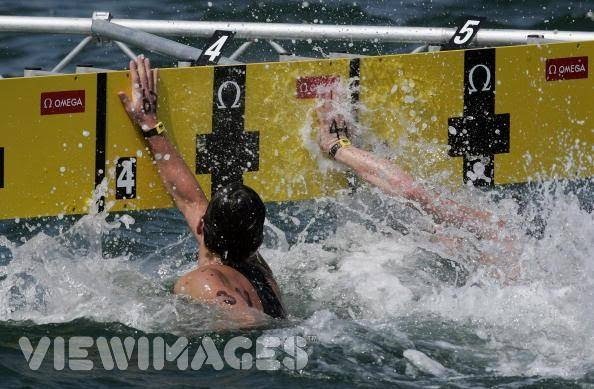 One of the most memorable sporting images in the 21st century was the finish of the 2008 Beijing Olympics 100-meter butterfly. Michael Phelps came storming during the last half of the race to beat Serbia’s Milorad Cavic by 0.01 seconds.

Serbia filed a protest after Michael won but the FINA officials reviewed the backup video and declared Michael the victor.

The last few strokes and the freeze-frame photograph of the finish was shown over and over and over again on televisions and websites around the world. Sports fans and commentators gushed over the improbable victory. The circumstances of the finish, the technique demonstrated and the tenacity of Michael fueled the world’s media appetite for human drama.

OPEN WATER SWIMMING CAN DO THE SAME.

It is, frankly, incredibly easy.

The sport of open water swimming can generate millions of fans by one very simple change in FINA rules.

So simple, yet unfortunately so apparently difficult.

And open water swimming will miss a great opportunity to help itself.

In pool swimming, the official times and placing are judged by electronic touchpads at the end of every lane. The plastic touchpads hanging down in the water instantaneously record the time and athletes. The swimmers, coaches, parents, media and fans immediately crank their necks from the pool to the scoreboard.

Times are shown along with the official position. 1 gets the gold, 2 the silver and 3 the bronze.

The human drama is unmistakable, immediate and memorable. Television loves these opportunities. It is what keeps fans coming back and inspiring athletes to continue training hard.

BUT OPEN WATER SWIMMING TURNS ITS BACK TO THE SAME DRAMA.

Unlike pool swimming, the official places of open water races – including the Olympic 10km Marathon Swim – are determined solely by the video cameras that are attached to the end of the finish pads.

It is not the transponders that determine the final placing of the open water swimmers, it is the video cameras.

And humans – the FINA officials look at a monitor behind closed doors – make these judgment calls.

And a review of these close finishes is extremely difficult at times due to the close finishes that open water swimming is known for. The officials have repeatedly look at these photo finishes – going over the images frame-by-frame, but in confidentiality away from the interested eyes of the media, athletes and coaches. The officials, many times, do not agree on the winners and discussions ensue until a consensus is reached.

WHY ARE THESE CLASSIC IMAGES – TOO CLOSE TO JUDGE IN MANY CASES – KEPT CONFIDENTIAL BY FINA?

The same human drama that Michael and Milorad provided in Beijing is not allowed by FINA in the open water swimming world.

Time and time again, photo finishes among open water swimmers are kept secret from not only the media and sports fans around the world, but they are also held confidential from the athletes and coaches themselves.

It is inexplicable, avoidable and unnecessary in our opinion.

Showing these photo finishes from the perspective of the finish cameras on the finish pads is unbelievably great human drama. Athletes and coaches would love to replay these images over and over. It is great entertainment. Uploads to YouTube would undoubtedly reach tens of thousands of views, if not many more. Fans and commentators would repeatedly debate and gush over the athletes, their techniques and their tenacity. The joy and thrill of victory would be matched by the agony and controversy of defeat.

But currently only a handful of FINA officials and timekeepers are allowed to witness this great drama.

FINA says these images cannot be shown to the public because.

While the answer remains elusive, the world of sport is missing out on truly great human drama and some fantastic photo finishes among some of the finest endurance athletes in the world.

One day in the future, we are hopeful that the handful of FINA officials will share their eyewitness opportunities with the rest of the world.

And then the world of open water swimming will benefit and gain many more appreciative fans while inspiring the next generation of swimmers, like Michael and Milorad have done in the pool.