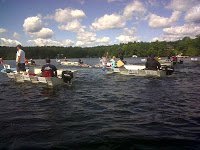 Will there be a changing of the guard on the 2011 FINA Open Water Swimming Grand Prix circuit after ten years?

It is possible that there will be a new king on the Grand Prix series? Andrea Volpini has a unique opportunity to overtake long-time Grand Prix champion Petar Stoychev.

Due to Petar’s focus on qualifying for the Olympic 10K Marathon Swim at the 2012 London Olympics, his preparation will have to be different than in years past. Petar needs flat-out speed to make his fourth-straight Olympic team for his native Bulgaria – and his training for the 10K qualification swim in Shanghai in July may take precedent over his usual globe-trotting ways to the 11-event Grand Prix circuit.

If there is ever an opportunity to break Petar’s decade-long dominance over the fastest professional marathon swimmers in the world, 2011 is it. But no one can or should count Petar out yet. The season is still young with seven more races to go. It will be a great competition throughout the year.