Mallorca Is The Best Fest For Canada 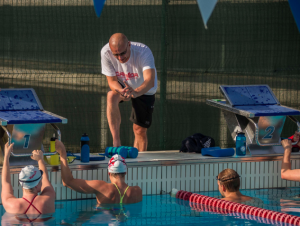 From South Africa to Spain, Mark Perry has been taking his elite swimmers around the world for years.  The head coach of Swimming Canada’s national open water team was previously in the same position with British Swimming knows how best to prepare his athletes for all kinds of competitions, conditions and challenges.

Swimming Canada is sending its national representatives to compete at the week-long Best Fest open water swimming festival, which begins Saturday at Colonia Saint Jordi on the Spanish island of Mallorca.

Perry said, “Best Fest offers a fantastic series of different races where we can really challenge our young swimmers.  The team will train and compete in five different race distances on different courses in a wide variety of conditions.  We have daily feedback sessions in groups and on an individual basis, showing extensive video analysis from both our drone and kayak-based cameras.

We’re able to effect massive change and have a unique learning opportunity in a short space of time, which is invaluable when developing athletes.  This is predominantly a development team with a few new swimmers.”

The Canadian swimmers include Kenna Smallegange of the Burlington Aquatic Devilrays, Kate Sullivan of the Mount Pearl Marlins, Payton Rerie of the Manta Swim Club, Madison Archer of the Nepean Kanata Barracudas, Chantel Jeffrey of the Island Swimming Club, Kyla Ross of the Island Swimming Club, Hau-Li Fan of the University of British Columbia Thunderbirds Swim Club, Ryley McRae of the Kamloops Classic Swimming, Calvin Slinn of the Winskill Dolphins, Alex Axon of the Markham Aquatic Club, and David Quirie of the Nepean Kanata Barracudas.