Mally Richards Is A Diamond In The Rough (Water) 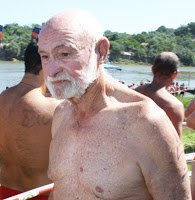 Mally Richards Is A Diamond In The Rough (Water)

Winchester said, “I certainly helps when others are doing it with you. It is safer and it makes you feel good and we hope to raise as much as we can for the Sea Scout Hut Roof Appeal.

I have been lucky. I have never missed a Christmas Day swim. It will be my first time with three generations of one family
.”

For Winchester to participate in the same open water swimming event for 54 consecutive year, it is truly something.

Since 1947, the then-15-year-old Mally Richards participated in his first River Mile – and has been participating ever since in the oldest open water swim in Africa.

This year, Richards participated in his 60th edition of the River Mile, an unprecedented record in the open water swimming community.

“Mally is one of those individuals in the open water swimming community whose accomplishments not only are outstanding, but they also give people hope that they too can live a long, healthful life,” remarked Steven Munatones, Vice President of the International Marathon Swimming Hall of Fame. “He set the bar in the open water swimming world in his 60th River Mile this year…with no end in sight. This 60-year achievement requires an unprecedented and nearly believable level of commitment, combined with a pure joy of swimming and ongoing attention to his physical wellness.”

And he has passed his passion for the sport to his son Kevin, a 6-time winner of the event, and his grandsons Sean (14) and Marc (10) who also participate in the oldest open water swimming event in Africa. “Mally has established a remarkable legacy and is an inspiration to people around the world,” continued Munatones. “His legacy is enviable.”

Since 1947, Richards has a unique perspective on the annual race. His fastest times over the course were recorded in his early twenties during the 1950’s when he was most fit from playing water polo. But his most enjoyable River Mile was in 2006. “It was a real festive occasion with lots of friends doing the event,” he explains, “When I was standing on the start line, it was just felt like you knew everyone.”

While Richards has stayed the course, he observed some changes over time. “The competitiveness of the event has changed the most. In the early years, the field was very limited. It is very competitive now. It’s a lot bigger and certainly more social.”

Like Winchester, Sally and Danielle in the U.K., Richards, Kevin, Sean and Marc are making open water swimming a multi-generational family affair.

Winchester sums it up for everyone, “I like swimming. We have good fun and I am sure it keeps me fit.”

Richards was nominated for the 2013 World Open Water Swimming Man of the Year. His nomination reads, “Decade after decade, Mally Richards takes his traditional spot on the line-up for the SPAR River Mile Festival. He smiles, he waves, he acknowledges the competition. But after 60 years of attending and participating in the oldest open water swimming event in Africa, this year the 80-year-old swimmer stands alone in terms of longevity at a single event. Since he started participating as a teenager in 1947, he has set a standard and plays a role model of good living in Jeffreys Bay, South Africa. For his unadulterated joy in swimming, for his goals to swim until he passes away, for his participating in open water events together with his son and grandsons, Mally Richards is a worthy nominee for the 2013 World Open Water Swimming Man of the Year.“