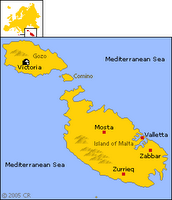 The Malta–Gozo–Malta Open Water Swimming Competition is a real challenge in the Mediterranean Sea.

The August 18th event is part of the six-part open water swimming series hosted by the Birkirkara St Joseph’s Sports Club in Malta.

Malta is an archipelago situated in the Mediterranean Sea south of the coast of Sicily, Italy.

The Malta-Gozo-Malta swim is held in the channel between the main island Malta and its sister island Gozo. Along the way, swimmers pass the small picturesque island of Comino.

Non-wetsuit and wetsuit swimmers can choose between a one-way distance of 5.5 km or a two-way crossing of 11 km. The annual charity event is usually held the third Saturday of August. Swimmers are required to be accompanied by escort boats, although swimming in groups up to four is allowed. The two-way 11 km swim starts in Marfa Bay on Malta with a turn-around buoy in Qala on Gozo. The one-way 5.5 km swim starts from Gozo and finishes on Malta.

The channel swims are part of the local open water swimming series organized by the Birkirkara St Joseph Sports Club. The series is held between June and August where local swimmers must qualify for the channel swim. Foreigner swimmers must produce a recent medical certificate and a letter from their coach to enable them to participate.