Man vs. Beasts In The Sea Of Cortez 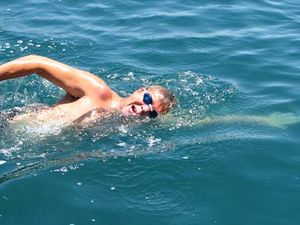 Paul Lundgren has changed the anticipated start date of his second Solo Cortez, an unprecedented 80-mile attempt to cross the Sea of Cortez.

“We decided that for the safety of the swim it is best to move the date to early November following the hurricane season that begins in mid-July and ends by October,” explains the California endurance athlete. “The jellyfish reach the height of their bloom in mid-July so hopefully they will be on the decline. The water will be around 78°F and the air temperature highs are in the mid-70°F’s and the lows are in the 50°F’s.

The crew will be more comfortable. I now face five more months of ultra-training. I will make it good
.”

The Solo Cortez attempt may take up to 60 hours and will follow the Channel Swimming Association rules where no stinger suits or protective swimwear is permitted.

If completed, the 49-year-old’s swim across Mexico’s Sea of Cortez will also mark the first successful crossing of that body of water following two failed relays and one solo attempt.

“This means I will continue to train for another five months, which isn’t an easy task,” explains the father of twin 7-year-old boys. “It takes a toll on my family.” But with the buy-in from his wife Chris Chorak, Lundgren said, “Life is an amazing process of continual change. There are changes we cannot control, like aging and there are those we can, as in this case—when you have a dream that requires change to make it come to life. By weighing the positives and negatives Chris wisely encouraged me to change course.”

Preparing for such an extreme swim in the Sea of Cortez is reminiscent of the recent attempts by Diana Nyad, Penny Palfrey, and Chloë McCardel across the Straits of Florida between Cuba and the United States. Due to the remote wilderness, largely unchartered by swimmers, preparation is significantly more complex than simply training, showing up and jumping in the water. There are currents, weather, tides and espcially marine life to factor into the plan.

If distance were the only challenge, then ultra-marathon solo swims across the Straits of Florida and the Sea of Cortez would have already been completed. Swimmers like Nyad, Palfrey, McCardel, Lundgren, and numerous others from Kevin Murphy and Stephen Redmond to Vicky Keith and Liz Fry, have the physical tools and mental strength to complete solo swims of at least 100 miles (162 km). But the financial burdens, logistical planning, weather and water uncertainty over a 3-day period, and especially the marine life are the bane of these salt-water ultra marathon swims.

While the mainstream media and most athletes consider sharks to be the primary predator that can end a swim, it is the nearly invisible and relatively tiny jellyfish that are usually the causes for premature finishes.

Tagged the “the world’s aquarium by Jacques Cousteau, the Sea of Cortez is home to carnivorous and potentially deadly Humboldt squid, debilitating and life-threatening jellyfish, and random hungry migrating Great White sharks. In previous attempts, it was the tiniest of these animals – the jellyfish – that led to swimmers being pulled out. For hundreds of millions of years, the jellyfish have existed and survived in the world’s oceans. And now, as the jellyfish are becoming the fastest proliferating creature on Earth, marathon swimmers are venturing out to swim within these blooms of venom-filled invertebrates. Whether Lundgren encounters jellyfish, Humboldt squid, or Great White Shark, these are battles that humans are physiologically ill-prepared to win.

And like marathon swims in the Caribbean and South Pacific, there is another issue that looms high on the pain scale. The pain causes by high salinity on the lips and around the soft tissue of the mouth.

Located between mainland Mexico and Baja California in the western part of Mexico, two hot desert environments, the Sea of Cortez’s salinity content is one of the highest in the world. “The salt is so high that after twelve hours of swimming your tongue begins to peal, leaving the raw nerves exposed to the constant in and out flush of water with each breath,” says Lundgren. “The pain is relentless and continuously increases with intensity.”

Even if everything goes according to plan, Lundgren estimates the swim will take at least 44 hours. For those swimmers who have swum in tropical parts of the world, the discomfort of swimming 2 hours in the salt water is well-known and disliked.

Due to all these concerns, in the case that emergency medical evacuation is required, the logistics and operations are nothing short of a military mission. With proper medical facilities hours away by boat and ground transportation, Lundgren’s support team must be prepared to provide life-sustaining medical attention for as long as eight hours on a boat in what could be stormy seas. Without a doubt, the difference between a comprehensive safety and contingency plan with an experienced team of experts could mean the difference between life and death. “This is something we do not take lightly,” said Lundgren. “Extending the date will provide us the opportunity to insure the swim happens with as few risks as possible. The extra time will also allow us to raise more funds that will help further ensure safety and success.”