Mano-a-Mano – When Great Athletes Collide In The Water 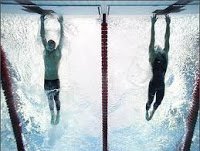 These all describe when two athletes face each other in the field of play, going at each other with gusto, intensity and fervor.

Great individual rivalries include Muhammad Ali and Joe Frazier when they went head-to-head in three classic heavyweight boxing matches (Fight of the Century, Ali-Frazier II and Thrilla in Manila) between 1971-1975.

Mano-a-mano can also refer to two great athletes going head-to-head within the realm of a team competition like Larry Bird and Magic Johnson did in their storied basketball careers, both in college and professional basketball. In track, there was the great rivalry between Steve Ovett and Sebastian Coe. In the pool, there was the classic duel between Gary Hall Jr. and Anthony Ervin who tied for the Olympic gold medal in the 50-meter freestyle at the 2000 Olympics or, more recently, Michael Phelps and Milorad Cavic. In golf, there were classic competition between Arnold Palmer and Jack Nicklaus. On the tennis court, there is Roger Federer vs. Rafael Nadal and Chris Evert vs. Martina Navratilova.

In the open water, the classic battle among the giants of the sport include Thomas Lurz and Spyridon Gianniotis. The two senior statesmen of professional marathon swimming went mano-a-mano in both the 5K and 10K races at the 2011 world championships in Shanghai – Spyridon topping Thomas in the 10K (see video below) and Thomas edging Spyridon in the 5K.

Their duel is conducted within the context of an aquatic battlefield where they sometimes at not swimming next to one another, but darting and weaving among other swimmers. But while they may not be swimming stroke-for-stroke throughout the entire race, when it comes down to the final bell lap, the heavyweights of the sport jump towards the front. With their lungs screaming in pain, they not only compete mano-a-mano against themselves and within themselves, but also with Mother Nature. Unlike the clearly defined lines in a pool or lanes in a track, Thomas and Spyridon can swim anywhere in the open water courses. With water temperature and water conditions both considerations, they must also navigate around turn buoys and down backstretches and straightaways where every navigational mistake is an invitation to their rival to take advantage.

And not only is their competition a face-off at world championship events and at the Olympics. Every day – twice a day – they jump in a pool, head towards the shore or workout in a gym and think about their own performance vis-a-vis each other. So whether they are going mano-a-mano in a lake or ocean, they are also going head to head within their own minds and imagination against their rival on every single lap or loop swum.

That is the very epitome of a rivalry. Recently named Swimming World Magazine’s Open Water Swimmers of the Year, Thomas Lurz and Spyridon Gianniotis are two world champions, two Olympic gold medal favorites, peaking at just the right time, both with the exact same goals in mind. Watch them at 12 noon, August 10th in the Serpentine at the 2012 London Olympics.

Vote for your favorite – here.