Many Wrongs Make A Right In The Open Water 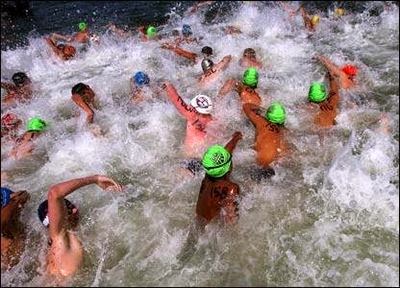 When we observe professional marathon races and amateur swims with an equal number of participants, one of the biggest differences we see is the relatively few numbers of packs of swimmers in the professional races compared with the amateur races.

There are several reasons for this, but one principle helps shed light on the few number of packs on the professional side.

The Many-wrongs Principle is a theory first proposed in 1964 with implications for the open water swimming world.

The principle leads us to observe that swimmer cohesion causes packs to navigate more accurately than single athletes making decisions independently and alone. That is, group navigational accuracy is generally increased as the pack size increases especially when individual directional uncertainty is high.

In amateur races in the ocean with rolling swells, this principle is often true. For example, in the Waikiki Roughwater Swim in Hawaii or other point-to-point races in turbulent seas, packs are generally closer to a straight-line course between buoys than individuals as the pack has several sets of eyes constantly navigating up and down the ocean swells and troughs.