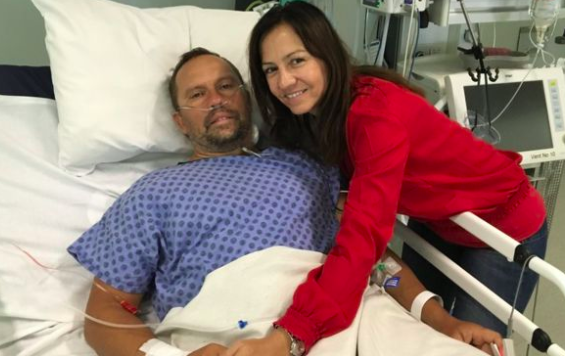 They talked about:
* his 80 km solo crossing of Lake Balaton in Hungary in 25 hours 32 minutes
* his 250+ career marathon swims
* his hospitalizations after his North Channel swims, one in Scotland and one in Northern Ireland
* his interest in swimming fast
* his years on the competitive FINA World Cup series

Photo above shows Mányoki at the Ulster Hospital in Northern Ireland with Monika Pais after swimming 10 hours 30 minutes between Northern Ireland and Scotland in the North Channel on his second attempt [his first attempt ended in a hospital on the Scottish side of the channel].

Ultimately, he succeeded on his third attempt of the North Channel in 12 hours 11 minutes and set a cumulative speed record for the Oceans Seven, 4 minutes faster than Michelle Macy. But his journey to success had a precarious stopover in the intensive care unit at the Ulster Hospital, Northern Ireland. Mányoki described his experiences in Hungarian (English translation below):

“A week ago, I was in water on the north channel. The 7 days since then have been very much for me. I was strong and weak, cheerful and sad. I’ve traveled a full range of emotional waves. Now here in my hospital room, everything has calmed down. I’m alive. I’ve been given another opportunity to fulfill my task, my goal and my passion. Maybe I can go home soon and it’s wonderful to be home. I have to recharge because the road is not over.

But now I’m going back in time to tell you my own experience and experience over the past week.

On August 3th, everything was still uncertain. When I got up, we didn’t know for sure which day I was swimming because the data was changing so fast. On that day, Monday seemed like the best option. Everyone waited and watched the data. By the end of the workout, Monday was changed for the next morning. And then, by night, it became certain, but the time of departure came forward. Then another hour ahead. Time is finite and there’s a lot to do to get ready to go. I was positive, but most importantly, there was no fear or bad feeling for me. I was strong, and when these things run into you, you feel like you’re going through anything! Rest is very important at this time, which I didn’t have much chance, but this has happened to me before. We have to live with the opportunity and not always in our best biological rhythm, but we have to seize it and live with it. I saw a very good opportunity in the sun. We left at 1 a.m. with my friend ion from the hotel to the port. While I was on the road, I was wondering how many people are enjoying the night, having a party, and I’m starting the day.

Everyone at the port was calm because we saw a good day. On the beach, we did some necessary data and checks, and then we packed the boat. We ran out of the harbor and we went to start. Calm, calm sea. Because I knew we’d be at the start-up site soon, so I saw him getting ready. Homing Beacon, beacon, cream and a few last sips. It felt good that many members of the local swimming society came out so early on the rocks for one last great encouragement. They had strong lights to light the rocks from where I could start. I jumped off the boat to get to the start. After a few minutes, I arrived, climbed on a rock, greeted my friends and held up my hand that I was ready to go!

After the departure signal, I went back into the water to begin the final phase of ocean seven. According to preliminary plans and strategy, I started swimming calmly. I didn’t even start the whole thing when I felt at the water that something changed. When I was shooting the water, I knew I was holding a jellyfish’s gelatinous head because I immediately felt a very intense pain in my forearm. I was in a gesture I couldn’t break. I took it instinctively. Thanks to this, this strong pain came through my neck, my chest, my stomach, and finally my thigh. It was shocking. I didn’t even start, and the escort ship was still away. Then after a few tempo, it all came back to me and I still don’t understand the safety ship. I couldn’t even work my first shock and I got a second one. The pain was brutal, which I had to endure several times in such a short time. I can’t stop, I gotta go ahead. I won’t complain because I haven’t even started yet. By the time I got to the boat, I realized that at least it’s not cool now because my whole body is on fire. I’m hot. I went to the tempo we discussed and worked. I did my job. My team worked well, listened to me and everybody did their job. Swimming went well. My hand was good. I knew I was doing everything as planned. The only thing that bothered me is that I haven’t emptied it, which normally happens every 30-40 minutes. I felt my stomach getting uncomfortable. I was hoping that in time, the situation would be resolved and no influence on my performance.

Unfortunately, this is where it started. The swim went on, I heard it as planned, but my stomach started to pry. The Pent-up poison began to unravel. He’s blocked the evacuation and metabolism. I didn’t miss updates because I needed a warm drink, I needed to replace lost energy, vitamins, etc. Since then, however, “I have become a closed system” the input materials have not been sucked up, everything is in my belly. I’ve been on my back more than 4. Hours to feel lighter from my stomach feeling. My speed was steadily high. I held a 4.2-4.3 average and my tempo number was 72-74 I felt comfortable in the 12-degree water, which slowly began to fall towards the trench. In the meantime, I’ve got some very encouraging data. Except for the discomfort from my stomach, swimming was fine. I got the usual refreshment package in 6. Hours. I’ve been away from the ship and I can’t remember anything. There are things we can’t answer. I swam. This is the last moment for me. Then another world began. Awakening. Very slowly and vague, but there was a silhouette I knew. I felt very slow. I tried to interpret the things around me, but he didn’t want to make any sense. My vision began to be clearer, and the silhouette of the silhouette became clearer. She smiles at me. I was confused because I didn’t know where to put myself. And then it all went away. He’s right next to me, I can feel his touch, I can see his face, but I’m still lost in time. The voices come in. He talks to me, but I can’t move. I was on a huge roller coaster. It was nice to have you with me, but it hurt me to do it again. Double feelings constantly.

They told me where I was and what was happening to me. My partner asked what I remember last. I told you to update 6. Do you know how much you swam? I guess 6 hours a few minutes. No, he answered. 10 hours, 30 minutes. I didn’t understand it, and it was incredible. I swam for 4 and a half hours by doing my job, but I lost contact. After that, all they had left was the storytellers. I did everything again, but I didn’t make it. The staff on this ship ended my experiment. They took me out for protecting my life. I don’t remember these. Nothing. The Toxin was already completely exposed. My left lung was completely collapsed, but the right one didn’t look good. At the hospital, I was in the hands of some very professional people. I got the best. It’s a hospital that’s totally top of everything. People are proud to be the best hospital in the kingdom. In the emergency room, in intensive care, I was just another man to save. I had two teams working on me, but the data they received didn’t give them much hope. They don’t like failure, they have to cling to the last hope. I’m so lucky. Unfortunately, I’ve turned in many places, many countries, but I’ve never seen anything like it. Nowhere – and not hurt anyone because everyone cooks what they have – but people’s attitude was something amazing that I wasn’t the only one to feel.

When I wasn’t under deep anesthesia, I was on a respirator for days because I couldn’t breathe on my own. I’ve been brainwashed to get the poison inside me. Long, painful days. The time has come to keep the machine off me, try to breathe on my own. The Relief of taking the tube out of my mouth was a little painful, which is still unpleasant. Somewhere under my left armpit, they introduced a tube that tried to get my lungs back into the normal system. The pain remained in me, but he indicated I was alive. The Chief Doctor told me that the first night he left the hospital, I was in a very bad condition with data that wasn’t compatible with life. He thought I’d be empty the next day… he didn’t think he’d talk to me.

Late Wednesday night, they brought me to another wing to continue my work. I’ve been visited every day ever since. I had them yesterday. They showed me all the footage. They explained everything. They told me how many jellyfish bites have caused a reaction and what has become its processes and consequences. It’s still unbelievable to them that I’m here and how my body is regenerating. One of them thinks I’m a special super human. In the eyes of another, I’m a hero to how much I can fight. I’ve been getting a lot of messages from friends and strangers that I’m a hero. I’m not a hero! Just doing my job, my passion. Heroes are the ones who dealt with me because they save lives every day and quietly in the background. I don’t save lives. I told them you were heroes, not me. Give back the greatest treasure to people, their lives! Every single day! One of them told me he’d be on board with me next time, because he wants to be a part of it.

I’ve become richer. I’ve met a lot of good people, and I’ve got another chance to come back because I haven’t finished my trip yet!

Thank you so much for encouraging me, rooting, worrying, squeezing me! It gives you great strength!

The Heroes are among us!