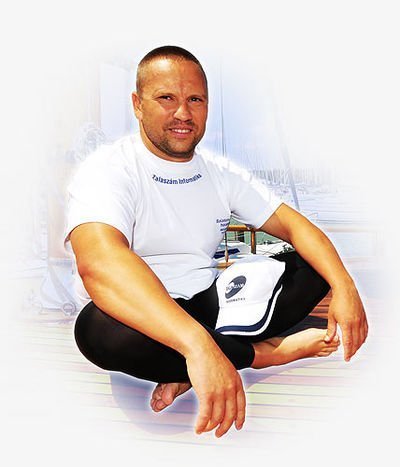 Chris Guesdon announced that Mányoki Attila of Hungary was voted into the International Marathon Swimming Hall of Fame.

Mányoki did his first marathon swim in 1989 at the 12.5-km Lake Balaton race between Balatonfüred and Siófok – and has not stopped yet. He has completed hundreds of marathon swims, most in the 25+ km range.

The Hungarian athlete – always a bundle of energy and charisma – has done equal parts racing in marathon swimming competitions and a number of solo swims with his longest attempt – twice – at 90 km.

He ventured outside Hungary with a 35 km swim in Greece between the cities of Kalamata and Koroni – and he then swam in Hungary, Italy, Canada, U.S.A., Germany, Serbia, Greece, Egypt, Brazil, Argentina, the Netherlands, Belgium, Croatia, Serbia, Greece, Japan, U.S.A., and in the Baltic Sea between Denmark and Germany.

In 2008, he swam 79.6 km across Lake Balaton between Balatonkenese and Keszthely in 25 hours 32 minutes to complete this distance of 79.6 km as well as completing several Swimming Marathons of the Messinian Gulf in Greece, not including two attempts at swimming 90 km across the Messinian Gulf.

But Mányoki is not yet close to culminating his career. He is currently en route to becoming the first Eastern European to complete the Oceans Seven. He has already completed the English Channel, Catalina Channel, Molokai Channel, and Tsugaru Channel – with the North Channel, Strait of Gibraltar and Cook Strait coming up.

“While he is now inducted in the International Marathon Swimming Hall of Fame, his best is yet to come,” predicted International Marathon Swimming Hall of Fame voter Steven Munatones. “Attila is always driven by another challenge – his fire within has kept burning throughout his career. Even when the conditions defeated him on a rare occasion, his enthusiasm for the sport never wavered. His passion is palpable to anyone who he meets; he is a great ambassador of the sport.”