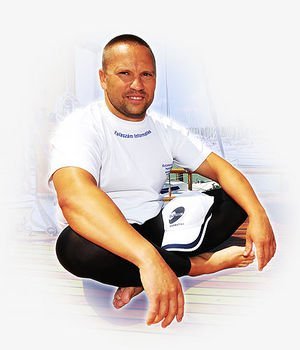 Attila Mányoki has been recently tearing through the Oceans Seven channels at a fast rate.

Last year, then then 31-year-old completed the third fastest crossing of the Tsugaru Channel in history with a 7 hour 29 minute swim.

Mányoki started at Papohaku Beach on Molokai Island at 6:05 pm on September 21st under the auspices of the Kaiwi Channel Association.

Due to strong currents, he walked onshore on Oahu at Makapu’u, an unprecedented northern facing finish point that has not been used ever.

When the currents are too strong to finish at the closest point at Sandy Beach, swimmers are pushed southwards (including Keo Nakama, Mike Spalding, and Kelly Gleason in Hanauma Bay, or Stephen Redmond, Michael Ventre and Kimberley Chambers at China Walls, and Adam Walker near Diamond Head). But with Mányoki’s strength, he forged northwards judging that the tougher course was a faster way to Oahu.

He and his crew of Jeff Kozlovich and Bill Goding were right.

Island channel veteran Linda Kaiser reports, “He swam in horrific conditions during a small craft advisory with winds at 20 knots and 8-9 foot wind waves. We just had a small tsunami last week from the big earthquake in Chile. According to the locals, the ocean was very confused. We are totally in awe of Attila.”

So far away from home, Mányoki is now headed over to the Catalina Channel where he will try to complete his fourth Oceans Seven channel.