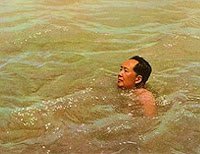 Chairman Mao‘s swim in the Yangtze River during the Cultural Revolution was highly symbolic where he urged the Chinese population to become more physically active and stronger physiologically while urging citizens to learn to swim in stormy weather. In 1969, he encouraged revolutionary combativeness by forging ahead courageously amid great storms and waves.

The records document that Chairman Mao first crossed the Yangtze River while swimming 13 km in 2:04. In 1955, he crossed the second time, swimming 14 km.

As the age of 63, he swam a 12.5-mile (20 km) course in 1956 in 2 hours flat as he “floated face up seaming without effort, making one or two strokes now and then, his serene face full of smiles as he enjoyed the scenery on both banks” according to Hong Kong’s Wen Wei Pao.

In 1957, Mao swam 12.5 miles in two hours from Wuchang to Hankow. In 1958, Mao swam in Yung River and interest in open water swimming continued in China.