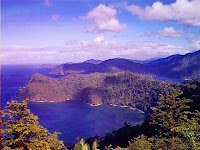 The Classic, one of the world’s top swims in beautiful Maracas Bay (shown on left), offers three races: 0.7K for 12&U swimmers, 2.5K and 5K.

The Amateur Swimming Association of Trinidad & Tobago has increased its focus on open water swimming and established an Open Water Committee, with Gordon Borde as its chairman, to achieve its goals. Together with Paul Homer, Gordon attended the inaugural Global Open Water Swimming Conference in Long Beach where top coaches, race organizers and world champions got together to put forward ideas to develop this aquatic discipline. Not coincidentally, one of the conference speakers was former world masters open water swimming champion Gerry Rodrigues, originally from Trinidad & Tobago.

The Maracas Open Water Classic has continued since the country’s independence in 1962 and attracted a growing number of foreign swimmers including 2009 world championship bronze medalist Francis Crippen.

Dozens of foreign athletes and many masters swimmers now compete in the Maracas Open Water Classic which is one of the World’s Top 100 Open Water Swims. Selected among over 3,000 open water swims around the world, this ranking speaks volumes for the quality race that is hosted for nearly five decades.

The qualification for the 5K race is a 3K race swum faster than 1 hour and 15 minutes. For more information, contact the Amateur Swimming Association of Trinidad & Tobago Facebook Group.