Marathon Run-Swim-Run Ends At The Hall Of Fame 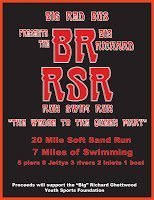 The Big Richard is the world’s longest beach run + ocean swim biathlon. The finish will culminate during the 2012 Global Open Water Swimming Conference on September 22nd.

The brutal coastal biathlon, fashioned after the Mega, is organized by Long Beach waterman Matty Mitchell. It starts at the surf-pounding Wedge in Newport Beach (shown on left) and to finishes at the majestic Queen Mary in Long Beach.

The September 22nd event, sponsored by the Big Red Bus, requires the athletes take only their swimsuit, cap and goggles. No shoes, no escorts, no mercy, all guts, 100% tough.