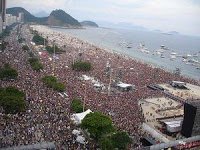 This August 9th (women) and 10th (men) the marathon swims come to the Serpentine in Hyde Park at the 2012 London Olympics.

This seminal event will be followed up in Copacabana Beach for the 2016 Rio Olympics.

Copacabana Beach is, arguably, one of the few places on Earth that can showcase marathon swimming to an even greater stage that what the British will do in Hyde Park.

Over a million spectators have gathered in Copacabana Beach for other major events, and we will have no doubt that huge number of spectators will flock to the shorelines of one of the world’s most famous beaches to watch the marathon swimmers during the 2016 Rio Olympics.

The number of spectators may be outrageously high in the crescent-shaped beach, especially if Brazilian native Poliana Okimoto wins a medal in the marathon swim at the London Olympics. The svelte, intense superstar has what it takes to get on the Olympic podium. 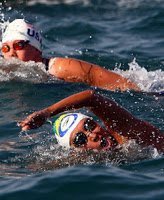 
And most importantly, Okimoto has the intangibles of a champion. The 2010 FINA 10km Marathon Swimming World Cup champion is intelligent in the water, always aware of who is around her and when to make the right move at the optimal time. She is a calm and composed individual, not prone to impulsive actions. With tens of thousands of spectators ringing the Serpentine and a volume of cheers that the marathon swimmers will experience for the first time, it will be critical for the athletes to remain focused and cool under pressure. And Okimoto is just the athlete who fits that bill.

So if there is anyplace that can continue the global upsurge in open water swimming after what will be a remarkable two remarkable days in the Serpentine where open water swimmers are showcased on a global stage, it will be Copacabana Beach. And extrapolate the excitement if Poliana Okimoto becomes an Olympic medalist in Hyde Park.