Marathoning In The Melaka Straits 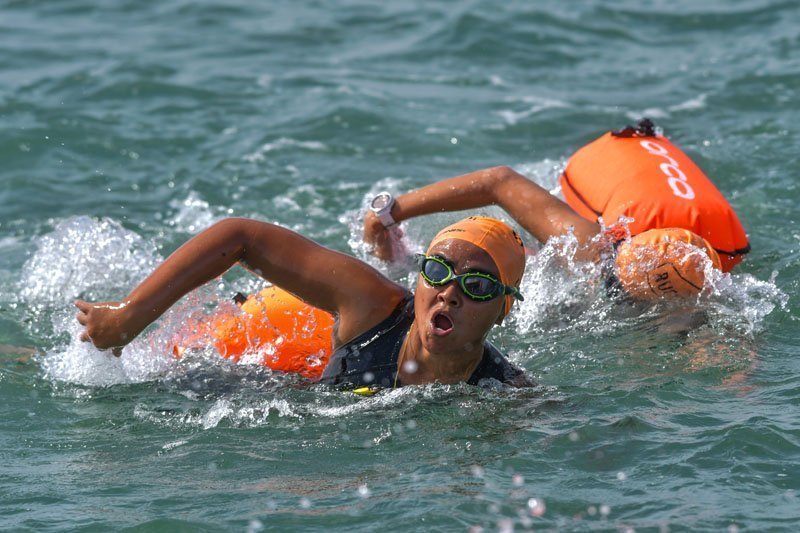 Relay swimmer Roseliza Tamam in foreground and an unidentified swimmer in the Straits of Melaka. 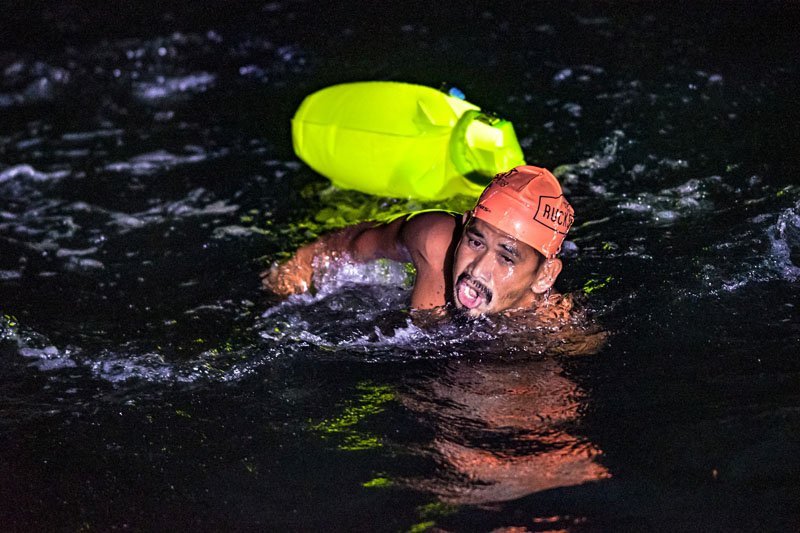 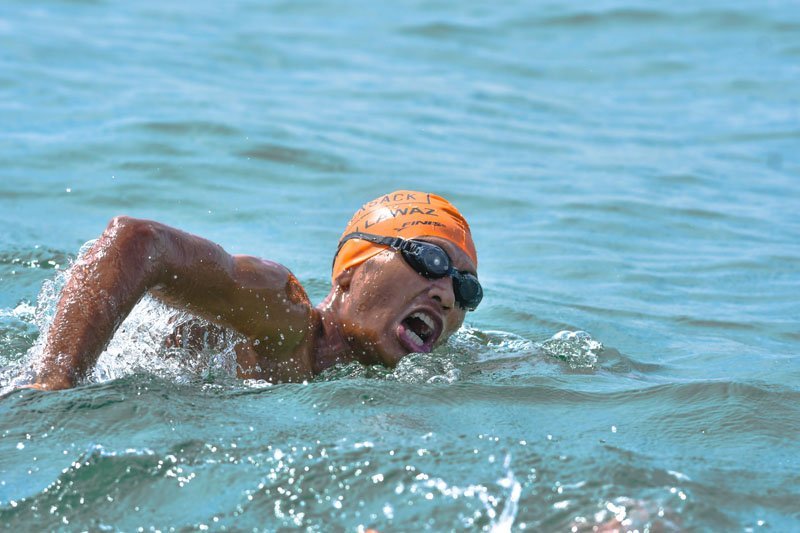 Photos courtesy of CSN SportsTalk. Report courtesy of Ridzwan A. Rahim in the Straits of Melaka, Malaysia.

On July 22nd, 29 swimmers from Malaysia, Singapore and Peru swam in the Straits of Melaka, starting and finishing on Port Dickson beach after completing a shortened 31 km Melaka Straits Swim in 15 – 18 hours.

Originally planned as a crossing of the Straits of Melaka from Indonesia to Malaysia, the event was called short due to operational issues and worsening weather conditions.

The Straits of Melaka is one of the busiest shipping lanes in the world where the Royal Malaysian Air Force swim team and 19 sea crew managers, lifesavers and feeders supported the swimmers along with the Malaysian Maritime Enforcement Agency with three escortboats. Also on board the escort boat were photographers from CSN SportsTalk, drone videographer Nik Fahusnaza, GPS tracking solution technicians from Teraju Tri-Tech Sdn Bhd, and a medical team from Universiti Sains Islam Malaysia led by Dr Shahrul Nizam Ahmad Zamzali.

Ridzwan A. Rahim explained the background of the event, “Originally planned as a 40-50 km crossing of the Straits of Melaka from Rupat Island in Indonesia to Port Dickson in Malaysia, the organizers unfortunately had to re-route the swim to within Malaysian waters after having been unable days before the event to meet operational requirements set by Indonesian authorities.”

Abdul Razak, who together with his wife Intan Siti Zarinah Jailani, organised a Straits of Melaka crossing in 1992 called Projek Berenang Merentasi Selat Melaka 1992 under Raleigh International Support group Malaysia, said he did not remember the swim as being so hard to put together. “Our only challenge at the time was to train and prepare our team members. They were mostly non-swimmers and we had nine months. Open water swimming was unheard of in 1992, so the authorities were wary of the dangers. They nevertheless supported us where we needed most, especially the Indonesian authorities.

Despite the inability to overcome operational hurdles, the Melaka Straits Swim team changed the swim plan to a 40 km swim within Malaysian waters. The swimmers were aided by good weather, calm seas and a mild current. “Praise be to God, it turned out to be a memorable open water swim experience for everyone involved,” said Abdul Razak.

There were two incidents among the group. Abdul Razak reported, “About 5 km into the swim, solo swimmer Razif Kamil was overcome by seasickness and was taken to the team’s mother vessel, MV Dickson Dragon, where he was rested. About 10 km into the swim, another solo swimmer, Timotius Ahimo, was stung by jellyfish. He was taken out of the water by the lifesaving team, attended to by the medics on the mother vessel and taken to the Port Dickson Hospital.”

Rahim said, “Because the swim was conducted at night for the most part, all the swimmers were equipped with brightly illuminated tow floats that could be seen from kilometers away. The floats also contained GPS transponders based on the Automatic Identification System, an automated and autonomous tracking system used by all ships, to ensure the swim team could be seen by other vessels and to help avoid collision.”

With suitable safety measures in place, the team swam towards the border between Malaysia and Indonesia through the night. At 2 am, they had swum 21 km and turned back towards the start of Port Dickson. When the sun came up on July 22nd, things continued to go well until the 31 km mark when the weather went south.

Rahim said, “The swim had to be cut short and all swimmers were instructed to board the mother vessel.”

Relay swimmer Bernard Soh Tuck Chuen from Singapore, who had swum 11.4 km during his legs, said such an epic swim requires more training than other open water events. “It was hard to juggle family time, work and swim training. I had to head to the beach late at night or in the wee hours of the morning when swimming pools were closed. Sometimes it is difficult to get a long weekend swim because of family commitments. I am most grateful to my wife for covering my portion of the household chores and taking care of our daughter during the many months I had spent training for this event.” 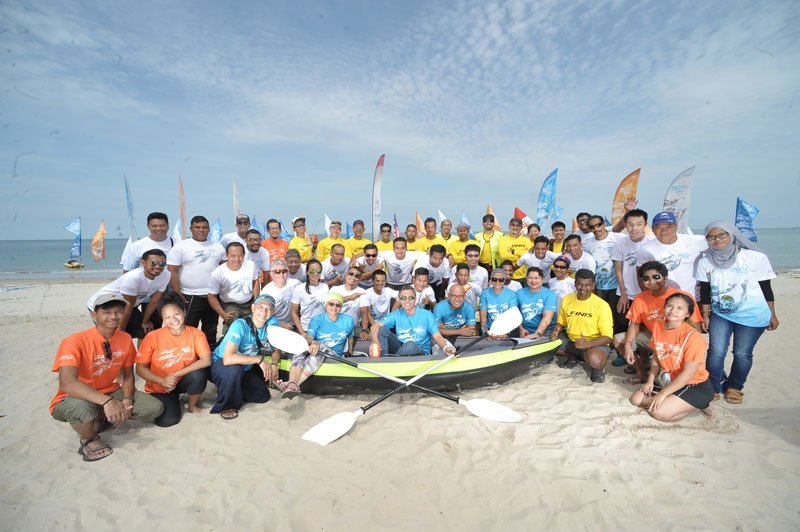 Swimmers, crew and members of the organizing committee of the Melaka Straits Swim 2018. 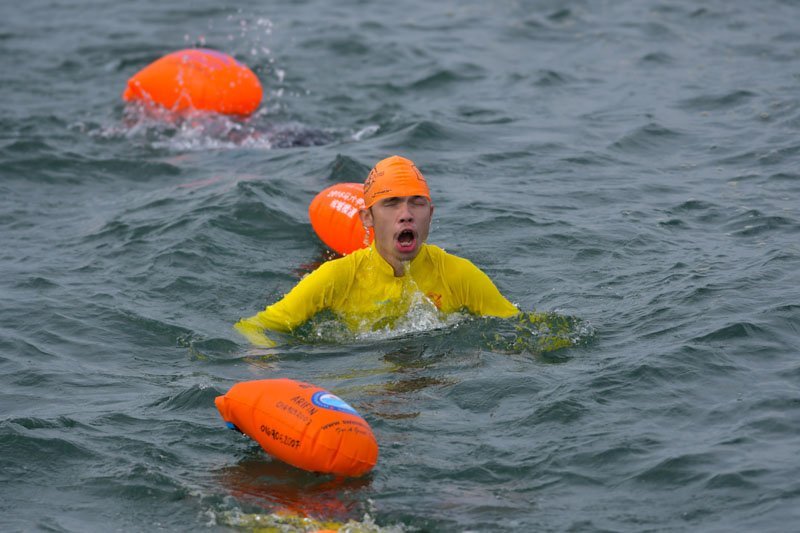 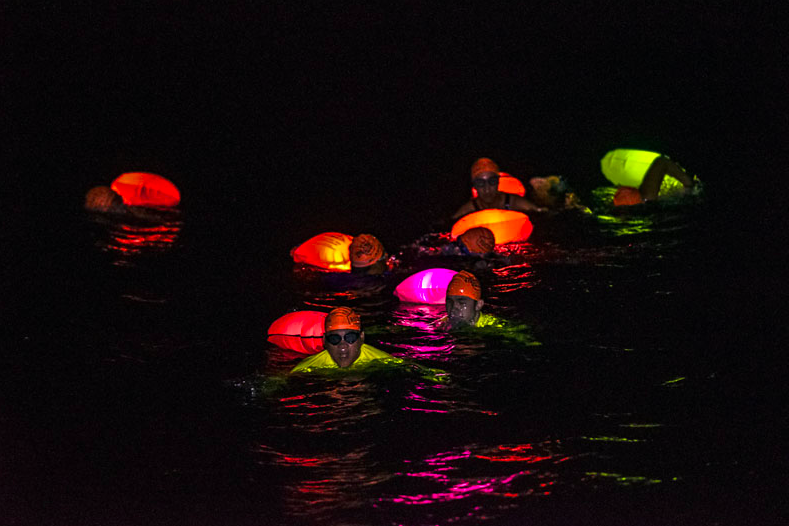 A group shot of relay swimmers with brightly illuminated tow floats during the night of the Melaka Straits Swim 2018.