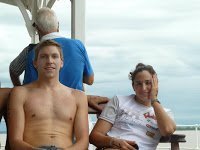 ARGENTINA. The Maratón Internacional Hernandarias – Paraná FINA Open Water Swimming Grand Prix was held this afternoon in the Paraná River. Although athletes prepared for the 88K, one of the world’s longest open water races, weather forced the event to be cut short to only a 5K event.

On the men’s side, Trent Grimsey from Australia took the crown. Despite the fact that he was ready for an ultra-marathon race, it didn’t stop him from demonstrating his talent for what these ultra-marathon swimmers call “sprint” events too.

“It would have been awesome to say I swam the world’s longest marathon but I can understand why they had to cancel the race, safety first,” said Grimsey.

Pilar Geijo took the sprint title in her home country in a close victory over Spaniard Esther Nunez. “I won the international race of 5K, in replacement of the Hernandarias-Paraná, suspended following the storm yesterday. It will not not score for the Grand Prix circuit, but it serves to start a great beginning of season!”

After hard rains and harsh winds caused the annual 88K race to be cancelled, newcomer Mallory Cook Mead of the USA swam to a third-place podium finish in her first international competition.

The results and times are below: