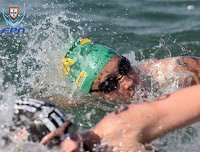 The world’s best professional marathon swimmers will converge on Santos, Brazil for the the International Aquatic Marathon of Saints (Maratona Aquática Internacional de Santos in Portuguese) on January 31st for the first major 10K pro competition of the year.

Watch the finish of the women’s race at the 2008 Maratona Aquática Internacional de Santos: