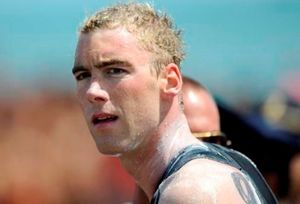 “All my best races are in the sea,” explains Olympian Brian Ryckeman. “There, I always feel in my element.”

He certainly looks comfortable and relaxed in the open water whether the conditions are calm or rough, especially at today’s season-ending Maratona del Golfo Capri-Napoli.

The tall professional swimmer from Belgium swings his arms methodically over tranquil or turbulent seas in the same powerful way, anchored by a rock-solid core and strong kick.

Earlier in the week, he won the 1 km sprint and was primed for the 36 km race. And he came through in the Mediterranean Sea where the outcome was no different. Ryckeman won the FINA Open Water Swimming Grand Prix professional marathon swim over Evgenij Pop Acev and Joanes Hedel of France.

“The race was a little bit of a roller coaster for me,” explains Ryckeman. “I got sick after 90 minutes because of the carbs, waves, and salt water and vomit a few times. After 2 hours 30 minutes, the current changed and the sea was flat so then I felt good again. Over the last 2 hours, when the waves returned, I got sick again. I didn’t eat or drink anymore in the last hour and a half, but still felt strong going into the finish.

The race itself was pretty slow at the beginning for the first 30 minutes. Hedel went to the left side and the group went on the right. Hedel swam faster and opened up a gap. I closed it, but we were still separated by about 400 meters. We were on the same line again while I had the feeling that the pack was watching my moves.

When I swam to the boat to get a drink, everybody followed me to my escort boat. At that point, I decided that I had better leave the pack and swim over to Hedel. If I didn’t change my plan, my fear was that Hedel who swims at a constant pace would create too large of a gap, especially if our pack did not keep a constant pace. I finally managed to leave the pack when Ercoli made his move. The whole group followed him, but only the Macedonian Pop Acev followed me.

We both swam over to Hedel. We immediately agreed to each swim 5 minutes in front switching in rotation. The French coach had a GPS and showed me afterwards that we swam for 2 hours at a pace of 1:07.8 average per 100 meters. That is pretty fast after 3 hours. We really worked excellent together and had a good understanding with each other. This was the reason we made a 300 to 400-meter gap on the other pack.

Over the last hour, I knew the trailing pack would not keep up and the winner would be one of us. I felt good and made my move the last 300 meters and am very happy that I won. The [FINA World Championship 25km and Capri-Napoli were my two goals this year. So I’m happy after the disasters of last year. I have managed to settle things right again.