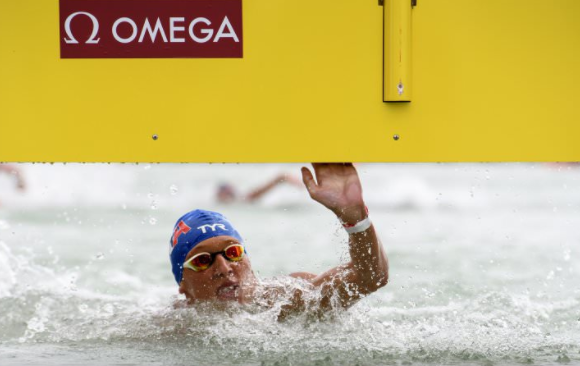 Marc-Antoine Olivier set the tone for the open water swimming events at 2017 FINA World Championships in Lake Balaton with a victory in the men’s 5 km.

It is going to be a blistering fast competition – arguably faster than expected. It also seems that previous successes in international competitions proved to mean little in Hungary – at least in the men’s 5 km.

Previous 5 km world championship medalists like Chad Ho of South Africa and Eric Hedlin of Canada finished far behind Olivier who won the race in turbulent conditions in 54 minutes 31 seconds.

Italy’s Mario Sanzullo was within striking distance, finishing 0.7 seconds behind the Frenchman and 2016 bronze medalist in the 10 km marathon swim. A newcomer Timothy Shuttleworth of Great Britain hung on for third, but finished 10.7 seconds back in the 23.2°C (76.7°F) water.

Olivier quickly put his stamp on the race. After 1 km, Olivier was leading in 11 minutes 45 seconds, already over 10 seconds over Kristof Rasovszky of Hungary who would end up leading in the early stages, ultimately placing seventh.

There is always an ebb and flow to the packs in the 5 km race. Danie Marais (ultimately finished 22nd), Logan Fontaine (8th) and Andrew Gemmell (17th) took their shots at the front. But, Olivier always positioned himself in the lead pack.

With 1.5 km to go, Olivier moved into the lead with Fontaine and Shuttleworth in podium positions. Fontaine temporarily took the lead before Olivier put the hammer down and shifted into overdrive to victory.

Olivier commented on swimming with his French teammate. “We did not have a common strategy with my teammate Logan Fontaine, who is a great swimmer. I am sure he will achieve some great results in the future. We do not train together regularly, but it happens a couple of occasions during the year.

My goal was to win the gold medal after finishing third in last year’s Olympics in Rio. The first 3000 metres weren’t perfect, but I changed tactics, and managed to finish first. I haven’t realized what I did, I wouldn’t have thought that I could win during the competition. We couldn’t yet analyze my race with my coach, it’s a whole new experience. It’s time to settle down..”

Sanzullo of Italy came on strong at the end to capture silver, his first world championship medal. “It was the first time that I competed here. I liked the race and the venue as well. I tried to do my best, in the end I touched the wall in second place. In Italy, we have great open water swimmers, like my friends Simone Ruffini and Andrea Manzi. It was my first medal at a major international competition, so I am very happy. It’s a fantastic feeling. It was a very strong and tough race. The water was perfect, the atmosphere was fascinating. For the first time in Hungary this is my first international medal, so I love this country..”

Similarly, Shuttleworth found himself dressing for the awards ceremony for the first time in his emerging international career. “I was also for the first time here in Balatonfüred. I like the lake and the venue. It was a very fast race. I tried to go with the first pack and I was very happy to finish third in the end.

I started off very strong and tried to swim easy at the middle. Unfortunately I slowed down for the last part of the course. The water was quite warm, ideal for me. This was my first competition in Hungary, I really enjoyed it, I hope I can come back.
.”

Hedlin, the 2015 silver medalist in the 5 km, never quite emerged from the scrum of 62 swimmers from 40 countries as he was remained between 6th and 26th place throughout the race. “I wanted to start out a little higher position. My shoulders really tightened up and I felt really stiff early on. After the first lap I felt more relaxed and started passing people. I got boxed in a little bit on most of the second lap, because I didn’t start with a good position. I could have come top seven if my positioning had been better.”

While Sanzullo was able to break away from the pack to capture silver, Hedlin was not in a similar position. “With 1,000 meters to go, I was passing people left and right, but I was too far back. I wanted to go come top ten or top seven, but it’s a learning experience. I came in here really fit, I just need to work a couple more things. I’m confident for the future, but I’m disappointed in the race.”

Swimming Canada’s head coach Mark Perry summed up what a lot of coaches thought of their athletes who did not get on the podium in the top 3. “Fourteenth in the world is a decent result. There are some skills we need to work on with Eric, particularly with the turns around the buoys. He knows himself, he knows he’s got it in him to be up on the podium. He put in the effort, it’s just the tactical and technical issues that we need to put right.”

The rest of the open water swimming events can be viewed on FINA tv here (outside of the USA, Guam, Puerto Rico, US Virgin Islands, Brazil, South Africa, Hong Kong, Malaysia, Brunei, China, Germany and Australia).