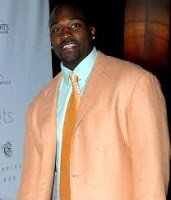 Marcellus Wiley is a 10-year veteran of the NFL (National Football League) and is a NFL Analyst and guest television commentary on many American sports shows.

As a boy growing up, Marcellus never learned how to swim and nearly had a drowning incident when he was 11 years old. This potential tragedy, combined with seeing the movie ‘Jaws’, made him terrified of the ocean.

In 2010, Marcellus decided to take on the Distance Swim Challenge – and finally conquer his greatest fears.

Over the last two months, Marcellus has pushed both his body and his mind to prepare for the open water swim on October 16th. When he started, he could not do even one length of a pool. 8 weeks later, he recently completed his first open water swim while wearing his custom-made size 5X wetsuit and will enter the 1.2-mile leg of a 4.8 mile relay.

“It is imperative that I confront and conquer my fears in order to grow. As important, is the necessity to step out of my comfort zones in life to inspire others to overcome their own personal challenges. This ensures that we all win in the game of life.”

CNN interviewed Marcellus last night on his dreams and how he inspires others. Watch the interview here.

After revving up on the CNN interview, Marcellus then appeared on ESPN where he explained again why he is taking up open water swimming. The great ESPN spot is here.