Marcelo Collet, From Tragedy to Triumph In The Channel 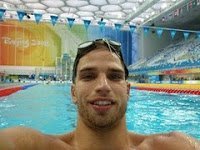 Crossing the channel – of any length – is difficult under any situation, but doing so while being physically disabled and coming from warm Brazil, is especially impressive.

But his fast time of 10 hours and 6 minutes is truly eye-opening as he shivered his way throughout the Channel, “I’m very, very happy indeed. I cannot even believe it. I am so exhausted [that] I am not going out to celebrate. I just wanted to sleep and relax my body and dream about [what I] achieved with diligence, perseverance and dedication. It was an unforgettable day, rather impossible.”

After two years of hard training, his success was made on his birthday. But like everyone who visits – and waits – in Dover, hoping for good conditions, but often being disappointed, Marcelo kept positive and his positive nature was rewarded. “I was thinking a thousand things, thinking that after two years, I could come here [to England] and not swim.”

But swim he did, decades after being hit by a car while training on his bicycle for triathlons. With the loss of his left leg, he focused on swimming and seems to have written a happy ending.

“I was born to be happy. My story is being written,” he said during the Paralympic World Championships in the Netherlands. This year, filmmaker Philip Bahia will produce a documentary about Marcelo’s preparation and success. “I hope it’s a success. [But I return] from England with a sense of duty fulfilled. I’m proud.”