After decades of racing, training, coaching, mentoring, writing, lecturing and administering on the subject of marathon swimming, American author, coach, speaker, and veteran swimmer Marcia Cleveland was elected as an Honor Swimmer in the International Marathon Swimming Hall of Fame.

In addition to writing her widely circulated and highly popular Dover Solo about swimming across the English Channel, Cleveland also completed the fastest cumulative time for the Triple Crown of Open Water Swimming in 24 hours 38 minutes 3 seconds (that includes a 9 hour 44 minute crossing of the English Channel, an 8 hour 56 minute 10 second crossing of the Catalina Channel, and a 5 hour 57 minute 53 circumnavigation of Manhattan Island).

“Her career is lengthy and expansive – she has raced all over the world and completed solo marathon swims and channel swims from Japan to England,” said Steven Munatones. “But, more importantly for the rest of us, she has volunteered for years to help others in the sport, giving thousands of hours of her time to mentor, guide, coach, and motivate others of all ages and abilities. She shares her passion and know-how of open water swimming to anyone who shows even a glimmer of interest.” 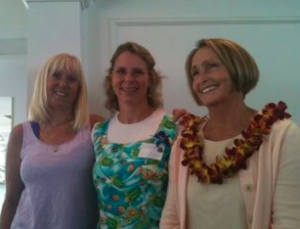 Ned Denison, chairperson of the International Marathon Swimming Hall of Fame describes the latest Cleveland to be added among the luminaries in the sport, “A marathon career of 27 years and continuing – record holder as the fastest Triple Crown Swimmer (combined time – as of end 2019), Marcia has been one of the most prolific contributors to the advancement of distance swimming – in the USA and globally.

Author of Dover Solo in 1999 – one of the few available training accounts/stories before the Internet. Continues to be the Bible for English Channel aspirants.

TedxTalk 2015: Achieving Success One Stroke at a Time, shown above.

Cleveland and her fellow inductees in the Class of 2020 will be honored in New York City on May 2nd 2020.