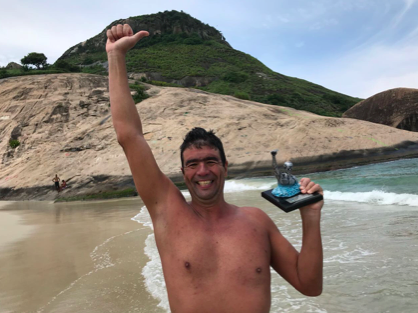 On January 8th at near midnight, Marcio Santos Junqueira started the 35 km Travessia do Leme ao Pontal. He swam along the coast of Rio de Janeiro, passing Sugar Loaf, the Christ the Redeemer statue, Cagarras Archipelago, Arpoador, and the beaches of Copacabana and Ipanema facing currents, winds, and the presence of jellyfish.

Past midnight and for the next two hours, he swam in place in the difficult currents of Barra da Tijuca beach.

“But he was brave and had the mental and physical strength to overcome the adversities and complete the challenge in 11 hours 49 minutes, the 11th solo swimmer in Leme to Pontal history,” reported Adherbal de Oliveira of the Leme to Pontal Swimming Association.

Santos said of his efforts and what he considers his greatest athletic achievement, “I knew it would be difficult and I respected it from the beginning, but I did not expect to face so many difficulties.”