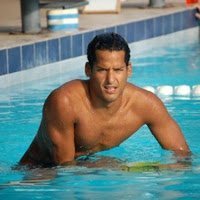 Yesterday from Indonesia, Marcos Diaz o the Dominican Republic reported that he successfully completed the first of his four swims in his unique Swim Across the Continents project.

Marcos said of his first swim between Oceania to Asia from Papua New Guinea to Indonesia, “Thank you very much to all my friends and supporters. 1 done and 3 to go. It was difficult but with much emotion, we continue on.”

Marcos‘s second swim will unite Asia to Africa with a swim from Perim Island in Yemen to the coast of Djibouti.

As part of the United Nation’s Millennium Development Goals, Marcos explains, “The poverty gap is still much too wide around the world. With this initiative I hope that all of us, rich and poor, government and business, men and women will come together to realize how far we are still from complying with the Millennium Development Goals agreed by the United Nations almost 10 years ago.”

Ban Ki-moon, the UN Secretary-General, welcomed Marcos‘ athletic and political initiative as did Wilfried Lemke, Special US Adviser on Sport for Development and Peace, “[His swim] has inspiring symbolic power. It demonstrates how interconnected we are in this world and that objectives and efforts to promote development and peace are truly global.”