Marcos Díaz To Be Honored In Long Beach, California 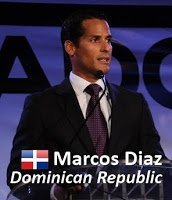 In a country where baseball reigns supreme, Marcos Díaz has created a buzz and unique niche for the open water swimming world.

He has traveled the world competing in professional marathon swims and amateur swims from Hong Kong to Turks & Caicos. He has given speeches and clinics on 5 continents, and met numerous local, regional and national leaders while encouraging people of all ages to follow him in the open water.

He also has organized a number of open water events domestically and internationally to celebrate the sport and draw attention to various charities, programs and themes.

His most successful promotion of open water swimming was his Swim Across The Continents, a series of marathon swims endorsed by the United Nations and the Un Nado Por Las Costas in his native Dominican Republic.

For his long, prolific body of work, Díaz was inducted in the International Marathon Swimming Hall of Fame and will be honored at the 2012 Global Open Water Swimming Conference in Long Beach, California on September 22 aboard the RMS Queen Mary.

To join Díaz and the other Hall of Fame honorees in Long Beach, register here for the Global Open Water Swimming Conference.