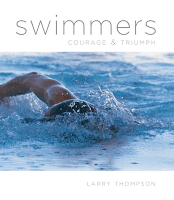 Swimmers: Courage and Triumph is an inspirational photographic and written collection of 19 compelling stories of swimmers.

Some of these swimmers are well-known among the general public (Mark Spitz, Lynne Cox and Natalie Coughlin) while others less known in society’s wider circles (Marcy MacDonald). Renowned swimming writers, including Phil Whitten, helped make these personalities come alive with engaging profiles that are beautifully enhanced by captivating photography.

“Everyone who achieves has a story where they were influenced and inspired by others. We are thrilled to bring to you nineteen profiles that will inspire swimmers and non-swimmers alike,” says Bruce Wigo, President of the International Swimming Hall of Fame.

Marcy, a member of the International Marathon Swimming Hall of Fame, has done eight successful English Channel crossings and has completed a two double-crossings of the English Channel (both in 2001 and 2004). She was booked for a triple-crossing in 2004, but was forced to retire after completing another double-crossing (11 hours and 14 minutes on the first leg and 11 hours and 46 minutes on the second leg). She also participated in a double-crossing English Channel relay in 2003. A resident of Andover, Connecticut, she completed in the Swim Across the Sound and the Manhattan Island Marathon Swim, the Boston Harbor Swim and the Egg Rock Scramble in Massachusetts, the Candlewood Lake swim in Connecticut.

Marcy, a podiatrist whose motto is ‘Dream-Prepare-Succeed’, explains how she was chosen an one of these inspirational stories, “[Editor and photographer] Larry Thompson asked me to be in the book because of my efforts in the English Channel. I was the first American woman to complete a double crossing in 2001. In 2003, I did my sixth crossing for the most crossings for an American woman. Since then, I’ve done another double, and my tenth crossing last year. As long as my health continues to be good, I hope to eventually have the most for all Americans, I need five more.”

“I cherish the friendships I have made through the years and love helping my patients. My education has allowed me to reach for my dreams in the water a couple months of the year.”