Marcy MacDonald Makes It 24 And 14 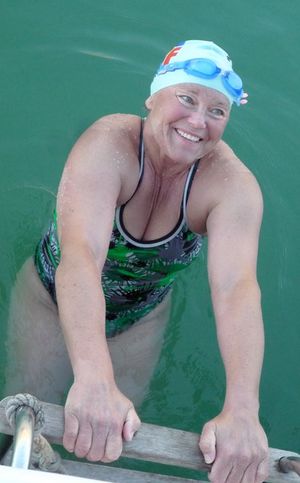 Nothing in the English Channel is guaranteed, but when Dr. Marcy MacDonald stands on the shores of Dover, there is good money on her chances of completing what she sets out to do.

Since 1994, the podiatrist from Andover, Connecticut has been crossing the English Channel between France and England. And she has gradually become one of the most prolific Channel swimmers of all time.

This week, the 49-year-old completed her 14th English Channel crossing with a 24-hour 16-minute two-way crossing of the Channel. This was her third successful two-way crossing of her career, and done in her typical fashion as a charity swim on behalf of the St. Vincent’s Medical Center.

Her impressions and recollections of her 13th and 14th Channel crossings are here which she called “lumpy…it wasn’t pretty conditions, [but] I have left the Channel without any permanent damage, a fantastic jellie sting and some super pectoral girdle soreness.”

Her achievement ties her for the all-time record for an American with Peter Jurzynski, who are interestingly enough are both from Connecticut.

Her pilots for the 24-hour Club crossing were Mike Oram and James Willi on the Gallivant. But her swim is not over: donations can still be made on her behalf via St. Vincent’s website page here.