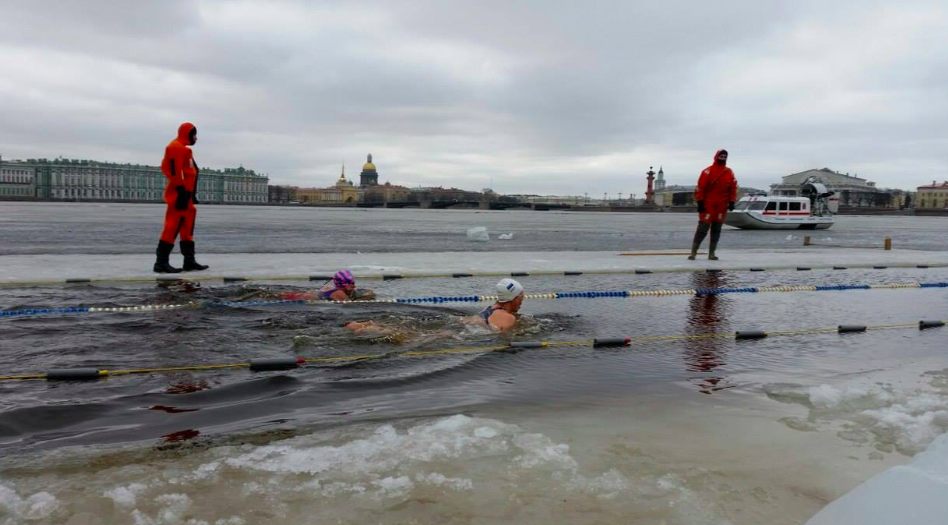 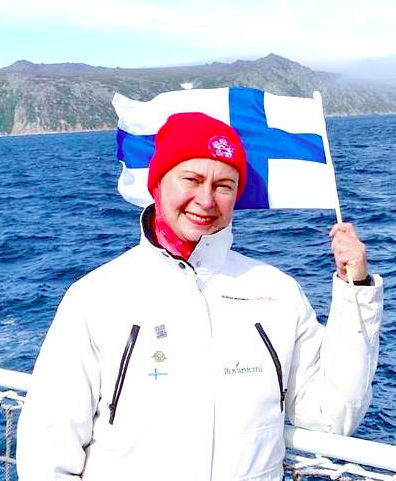 International Winter Swimming Association president Mariia Yrjö‐Koskinen was one of the inaugural honorees of the Ice Swimming Hall of Fame.

It was a very well-deserved honor that the globe-trotting Finnish administrator and cold water swimming visionary was recognized as an Honor Swimmer by the organization founded by Ned Denison and Paolo Chiarino, Elaine Howley, Pádraig Mallon, Leszek Naziemiec, Kieron Palframan, Shelley Taylor-Smith, and Jonty Warneken.

From her home in Riihimäki, Finland, Yrjö‐Koskinen is constantly on the go sanctioning and promoting the International Winter Swimming World Cup circuit from 2006 to the present.

She is always competing in her significant breaststroke, handing out awards to podium winners, and motivating newcomers during every significant winter swimming races and World Cup events.

The International Winter Swimming Association (IWSA) officially started in 2006 – but it emerged from historically traditional cold water activities. The tradition of sauna and dipping into a hole in the ice (ice hole swimming) is long established in Finland, the same thing that Yrjö‐Koskinen did during her childhood.

In 2002, she attended her first Finnish Winter Swimming Championships. Thoroughly intrigued by this growing organized competition, she later encouraged her local club to host the 2005 Finnish Winter Swimming Championships in order to celebrate the 400th anniversary of the City of Oulu. With her boundless energy, she arranged significant support from the City Council and launched a marketing campaign.

Her campaign attracted 1,200 winter swimmers including a team of 20 cold water swimmers from the South London Swimming Club that gave an international flavor to the event. This led her club to host the 2006 Winter Swimming World Championships where she marketed the event actively in Belarus, Estonia, Latvia, Russia and the UK.

The 2006 event drew many swimmers – including fellow Ice Swimming Hall of Famer Lewis Pugh – and significant television, newspaper, magazine and social media attention. For the first time, freestyle races were included which helped increase the popularity of the discipline. Yrjö‐Koskinen then assembled an international board of directors and the International Winter Swimming Association was established in 2006.

This led to the South London Swimming Club hosting a 2006 event in London, the first UK Cold Water Championships. The Association then used this event as a springboard to promote the winter swimming niche globally as Yrjö‐Koskinen took the leadership mantle as its president.

Among her swimming accomplishments are as follows:

Contribution Summary:
 Yrjö‐Koskinen led the growth of the IWSA Winter Swimming World Championships from 680 swimmers in 2008 (London), 980 swimmers in 2010 (Lake Bled, Slovenia), 1,129 swimmers in 2012 (Jurmala, Latvia), 1,244 swimmers in 2014 (Rovaniemi, Finland), 1,275 swimmers in 2016 (Tyumen, Russia), and 1,366 swimmers and 800 at the gala dinner in 2018 (Tallinn, Estonia).
 Beginning in the 2015-2016 season, the IWSA organized an annual World Cup series. In the 2017-2018 season, the series attracted 1,456 swimmers (842 male and 614 female) representing 40 countries between the ages of 9 and 90.
 The IWSA has organized winter swimming events in the Springs Festival in Jinan, China for seven years with a future plan for an annual World Cup Competition. As part of this cooperation, Yrjö‐Koskinen was named as a Promotional Ambassador to Jinan Tourism 2017‐2019.
 Yrjö‐Koskinen traveled to 25 countries while representing the IWSA: Argentina, Belarus, Belgium, Canada, China, Croatia, Czech Republic, Denmark, Estonia, Finland, Greece, Hungary, Ireland, Latvia, Norway, Poland, Russia, Scotland, Slovakia, Slovenia, Spain, Sweden, Turkey, UK and USA.