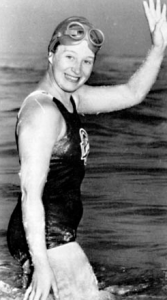 Marilyn Bell and Bob Duenkel are inductees in the International Marathon Swimming Hall of Fame.

Next year, they will both be inducted in the International Swimming Hall of Fame as members of the Class of 2020.

International Swimming Hall of Fame CEO Brent Rutemiller describes the two dual inductees, “Marilyn will be inducted as an Honor Open Water Swimmer. As a 16-year old Canadian, her 20 hour 59 minute swim across Lake Ontario was covered by radio station broadcasts and special newspaper extras covering the swim. As a result of the publicity, her landing was witnessed by a crowd of 300,000 people in Toronto. Her courage and achievement resulted in the Canadian Press naming her the Canadian Newsmaker of the Year in 1954.

She went on to become the youngest person to swim the English Channel and later the Strait of Juan de Fuca off the Pacific coast where her women’s speed record held for more than 60 years. She became a Canadian hero with awards and recognition that include inductions into several Halls of Fame.“

Duenkel will be inducted as an Honor Contributor. “His greatest contribution to swimming was his 40+ years of dedication and service to the International Swimming Hall of Fame. As Buck Dawson’s assistant for many years, he absorbed the history of swimming like a sponge, not just from Dawson, but through the stories of ISHOF Honorees, Johnny Weissmuller, Eleanor Holm, Buster Crabbe, Esther Williams and many, many others. His knowledge of swimming history was encyclopedic. He studied and knew all the small details of swimming and swimmers, from the ancient Greek swimmer Leander to the most recent inductee, every Olympiad, every event, every time and every stroke.

Bob was ISHOF’s museum curator and presided over 40 years of its induction ceremonies. He was a wonderful ambassador to swimming. There will never be another person more knowledgeable about every aspect of aquatics than Bob who passed away in February 2019.“

In addition, two Olympic swimmers who have organized or done open water swims – Michael Klim of Australia and Rebecca Soni of the USA will also be honored as Honor Swimmers.

For more information on the ISHOF ceremonies that will be held April 25th 2020 in Fort Lauderdale, Florida, visit www.ishof.org.