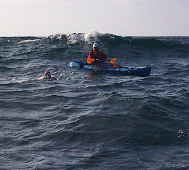 Her first swim was across the Santa Barbara Channel from Santa Cruz Island to the California mainland in the city of Oxnard. But a shark showed up during her July attempt. “It came closer in circles and then made a beeline for me,” she recalled. “We think it was a great white shark [see photos here].

I went back in September and did the swim painted in my war paint, black and white zinc oxide to look like a banded snake which sharks are afraid of. Unfortunately, the waves were much higher and a current slowed me down, but I did it in 18 hours 45 minutes
.”

Another crossing – this time across a new course in Lake Superior – was scheduled to be Dr. Korzekwa’s last major swim before retirement. Her crossing of Lake Superior was made on August 19th. “I was lucky there to have caught great weather except for three hours of confused waves,” she said about the new course that she labeled the Edmund Fitzgerald route. “I was so fired up to do this swim, I didn’t believe the official afterwards that the water was 62°F.”

The swims culminate her prolific career. “At 61, I am retiring from big swims. The stress on my body and my family is too much, the pool for 7-8 months of the year is killing me, and I am getting too slow to be competitive. But you may see my name popping up here and there on smaller swims.”

Dr. Korzekwa swam across the Santa Barbara Channel from Santa Cruz Island to the mainland north of Los Angeles on September 12th to raise money to support mental health.

She left the rocky cliff of San Pedro Point on the island at 12:25 am and landed in the surf at Hollywood Beach, Oxnard just after sunset 18 hours 45 minutes later. She raised money for The Sashbear Foundation which is dedicated to supporting families across Canada who have loved ones suffering with mental illness.

This was her second crossing attempt of the Santa Barbara Channel. She had been pulled out of the water in July due to a Great White Shark showing predatory behavior towards her. After that, she decided to paint her arms and legs in black and white bands of zinc oxide to make her look like a snake. “Research from Australia shows that sharks are afraid of snakes and avoid them,” she explained.

“It was tough swim. The wind and the 1 meter waves came at me from all directions for a third of the swim. This made my shoulders and wrists ache. Then I had to negotiate 1-2 meter waves pushing me into shore for 9 km. The scariest part was landing in the 2 meter surf.” The crew and Dr. Korzekwa were enchanted by a pod of over 100 dolphins that swam with them.

The 29 km swim across the mouth of Whitefish Bay, in the eastern end of Lake Superior, has never been done before, although a 32 km crossing of the warmer western waters from Wisconsin to Minnesota has been swum twice. She said, ”It was very hard to select a start date and time because the winds are unpredictable due to the geography of Whitefish Bay. I was very lucky that the one-meter waves only threw me around for three hours. Most of the swim, the waves were either behind me or it was flat. However, the water temperature was a cold 16.5°C most of the way across.

Lake Superior is a spectacularly beautiful lake with crystal blue water, surrounded by hills and cliffs, and ringed by rugged rocks and sandy beaches. It makes me proud to be Canadian. I have wanted to do this swim for 20 years. I am ecstatic to have conquered Lake Superior.”

Meticulous planning went into making this attempt a success, including a lot of research about the weather and selecting the right crew. She credits her lead captain, David Steele, with making this swim possible and successful with the help of the Sault Search and Rescue. “David knows these waters and the winds inside out.”

Her swim was officiated and governed by Solo Swims of Ontario, represented by Colleen Shields and Jodi DiLascio, Marilyn Bell’s daughter. Shields said, “Marilyn was on a mission. I have never seen her swim so fast.“

“I chose The Sashbear Foundation for the charity donations because it provides a free peer-led course called Family Connections™ that gives families the skills to become more effective in dealing with mental illness. Funding goes towards Sashbear’s efforts to expand the program across Canada. As a psychiatrist, I know that helping families cope with their loved ones is life-changing. The Sashbear program does not require a referral or diagnosis and the program is free.

The Sashbear Foundation was created by Lynn Courey and Mike Menu whose daughter Sasha Menu-Courey, died by suicide in 2011
.”

Donations can be made here. For more information about her swims, visit www.swimwithmarilyn.blogspot.ca.