Marine Life Nowhere To Be Seen 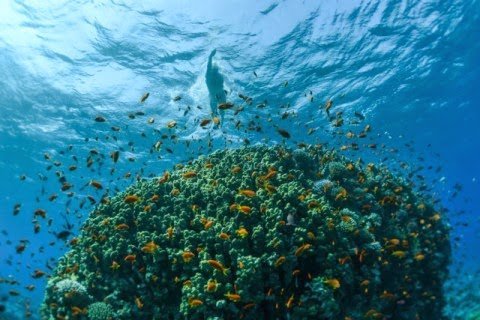 Lewis Pugh does things we never even dream of doing.

The Hall of Famer swims in the cold, not only in Cape Town where he resides, but also in frozen fjords and high upon Mount Everest.

He does majestic pioneering swims in the North and South Poles and generates global awareness for causes ranging from climate change to environmental damage to the world’s oceans. He pals around with decision-makers and government leaders.

He is able to obtain sponsorship and media attention centered around his swimming passion as one of the world’s most recognizable swimming stars.

But his recent swims in the Seven Seas reminded us – sadly – of the same experiences that we had at the 2011 Special Olympics World Summer Games in Greece. Surprisingly, we sensed an uncommon bond between Pugh and ourselves.

During Pugh’s Seven Swims in the Seven Seas for 1 Reason, he came across something that we similarly saw – to our initial bewilderment.

In the Aegean Sea near the city of Marathon, we swam twice daily with Bruckner Chase in the warm off-shore waters. We enjoyed long swims along the shore both in the tranquil morning hours and in the turbulent windy afternoons. The water was undeniably clear and relatively clean, but it was…eerie. The coastlines were beautiful, but the swims were disarmingly…quiet.

The ambiance seemed quiet in the sense that every time we looked down to the depths, there was some seaweed and shells on the sea floor, but not much else. We only occasionally came across tiny marine life. We saw no big fish or even medium-sized fish. In such apparently clean and clear waters, we had expected to see abundant marine life. Chase explained that the sea was essentially fished out.

But Pugh, a storyteller extraordinaire, explains it more eloquently on his website (see here): “…And then there are the things I would rather forget. Such as the sea floor under me as I swam the Aegean, which was covered with litter; I saw tyres and plastic bags, bottles, cans, shoes and clothing – but absolutely nothing that qualifies as ‘sea life’.

In the Arabian Sea I swam through vast shoals of turtles, which was spectacular. They do belong there. But so do many, many other fish species, and those were nowhere to be seen.

I never saw any fish bigger than the size of my hand, in any of the 7 Seas. The larger ones had all been fished out. The Black Sea was full of jellyfish. This is not a good thing, because they don’t belong there – they were brought in with the ballast on visiting ships and wrought havoc on an ecosystem that was already unbalanced.

In the entire four weeks I did not see one shark, anywhere

Note: The photo above was taken in a Marine Protected Areas – where marine life is plentiful. The ultimate goal of Pugh’s campaign is to help create more of these MPAs.

/seven-swims-in-seven-seas-1-reason-6.html”target=”_blank”>Seven Swims In The Seven Seas – 1 Reason, 6 Down