Part of the lure of open water swimming is the opportunity to travel to new places, meet new people, and experience different types of venues and conditions, from tranquil lakes to angry seas.

Swimming at high altitude in Switzerland or battling the high surf of Hawaii can create aquatic differences that are greater than between a 50 freestyle and a 400 individual medley.

The most experienced open water swimmers – men like Michael Read and Kevin Murphy who have swum hundreds of swims across five continents or women like Michelle Macy or Penny Palfrey who have swum thousands of kilometers around the world – have an unusual database in their minds.

Little stings and big stings. Little zappers and massively painful whallops from tentacles that are either nearly invisible and extremely colorful. Stings can leave the skin red and puffy, or simply leave small marks that soon go away. The jellies come in all sizes and shapes, and produce myriad levels of discomfort and pain.

Jellyfish are found in every ocean and even in a few freshwater locations. Jellyfish have roamed the seas for at least 500 million years, making them the oldest multi-organ animal.

“They were big,” said Olympic champion Larisa Ilchenko talking about the blue blubbers that covered the surface of the course at the 2009 World Swimming Championships in Melbourne, Australia.

“I could hear girls screaming on the first lap when they got stung.” World champion Angela Maurer who was also in the same race agreed, “My whole body just burned. There were so many jellyfish out there.”

Fellow competitor Britta Kamrau similarly describes a FINA World Cup race in Haikou, China when the swimmers faced a shifting tides and stiff winds, “We were more than 10 hours in the water, but we all did only 15 kilometers before they finally cancelled the race. It was horrible, there were very bad and painful jellyfish with us throughout the whole race.” 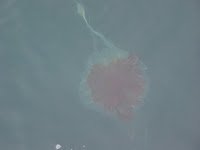 From Ireland’s Lion’s Mane and Mexico’s agua mala to the Caribbean Sea’s box jellies and Australia’s stingers, jellyfish can leave marks and memories on those open water swimmers who travel the world.