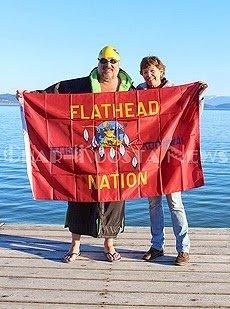 Mark Johnston is expanding his offerings in the Montana open water swimming community after winning 2 events and finishing in the top 3 in two other events at the 2015 United States Winter Swimming Championships in Lake Memphremagog, Vermont this month.

The former head coach of the LAKE Monsters and founder of the Flathead Lake Open Water Swimmers (FLOWSWIMMER) from Polson, Montana near Flathead Lake. After serving as the race director of Water Daze in Flathead Lake, he and his wife are developing additional open water opportunities around Flathead Lake this summer. “We’ve recently purchased a pontoon boat in support.”

Watch for future announcements at FLOWSWIMMERS.

Mark Johnston and his wife Dana are shown above with the Confederated Salish and Kootenai Flag that he took to the United States Winter Swimming Championships.