Mark Warkentin On Being An Olympian 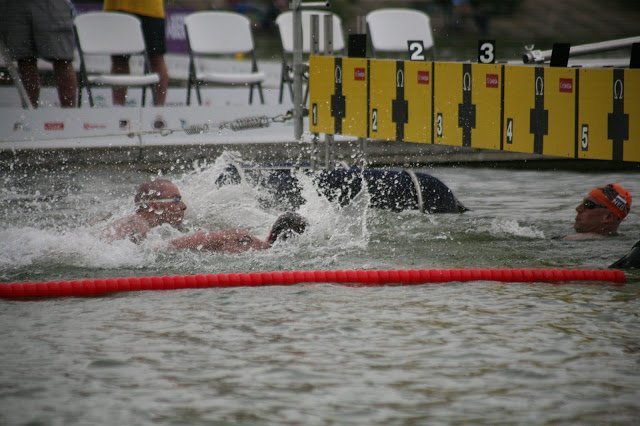 Mark Warkentin On Being An Olympian

Mark Warkentin, a 2008 Olympic marathon swimmer from Santa Barbara, California, had trained with and raced against Olympic medalists and Olympians for much of his pool swimming career. But it was not until the 2008 World Open Water Swimming Championships in Sevilla, Spain until he could also call himself an Olympian.

He ultimately finished 8th in the 2008 Olympic 10K Marathon Swim in the Shunyi Olympic Rowing-Canoeing Park at the Beijing Olympic Games [see below]:

Warkentin discussed how he prepared for the race of his life when he made the Olympic team:

Daily News of Open Water Swimming: What is it like facing a race that you have been training your entire life for?

Mark Warkentin: Swimming in THE race if your life is frightening if you know beforehand the severity of the consequence of that one race. For most of my career as a competitive swimmer, from age 10 until the age of 26, there was always a tomorrow, always another chance, always another race. In Seville at the 2008 World Open Water Swimming Championships, there was no tomorrow, no second chance, no race in the future to get ready for. That was a bizarre self-realization.

On the other hand, while it was certainly frightening, there was also a sense of peace on the morning of the race. After months breaking down every aspect of the race and a lifetime of training I had relief knowing that the end – whatever it would be – was near. I had accepted the various potential outcomes and was at peace that, at the very least, the stressful days would finally be over.

Daily News of Open Water Swimming: What was your favorite pre-race dinner?

Mark Warkentin: I don’t remember dinner the night before the race, but on the morning of a race I always ate a ton of Cheerios. Probably an entire family sized box. I would wake up early and just start eating bowl after bowl after bowl. Cheerios are bland and basic and a good base substance to have in your stomach during a race.

Daily News of Open Water Swimming: Did you have any particular rituals the day or night before or the morning of your race?

Mark Warkentin: The morning of big races I always tried to force myself to be extroverted and in communication with those around me to get over my nervousness. I would talk about nothing with anyone and try to have a pleasant conversation. One big mistake I made as a pool swimmer was that I got too self-focused before a race – I would listen to my music and turn the world off – and that actually made me really nervous. When I got into open water swimming, I made a strategic decision that on the morning of a race- no matter how big of a race it was – I wouldn’t turn into a complete nervous wreck. So, I tried to tell jokes instead. I took pictures with my wife and family and tried to talk to as many friends (non-competitors) as possible. It worked really well.

Daily News of Open Water Swimming: During the early part (first half) of the qualification race where you qualified for the 2008 Olympics, what were you thinking?

Mark Warkentin: In my mind the 10 km at 2008 World Championships in Seville is the greatest open water race ever. The magnitude of the consequences, combined with the top flight star power and the tremendous depth of the field has not been matched before or since (in my mind) including at the 2008 and 2012 Olympics. This is simply because the qualifications to get into the Olympic race are so challenging that even the top flight countries – those that have at least 2 to 3 legitimate open water swimmers – have typically only sent a single athlete to the Olympics. Therefore, at least in my mind, the Olympics is significantly less competitive than the World Championships.

No one knew what to expect from a field that deep, but the depth of the field wasn’t the scary part. There was an added level of suspense in the form of two wild cards in the race. David Davies and Grant Hackett were sub 15-minute 1500m swimmers entered in the race, but lacking in experience in international competitions. This was very scary for the rest of us because we didn’t know what to expect from them. Everyone knew how the pre-race favorites Vladimir Dyachin and Thomas Lurz would swim their race – but none of us knew what to expect from Davies or Hackett strategy-wise.

So, what was I thinking during the first half of the race? “Don’t allow yourself to get more than 3 rows behind the leader. Fight for position in the fourth or fifth row of the pack, but under no circumstances fall behind the fifth row.” That’s how I swam the first 5 km. I fought through every turn and maintained my position at all costs. I don’t think I’ve ever felt that claustrophobic in my life and I certainly endured some physical conflicts along the way, but my mind never wandered much from what was happening immediately at that exact moment. There wasn’t any time to lose focus. I couldn’t think about anything but what happening 2 inches from my face.

Daily News of Open Water Swimming: During the second half of the qualification race, what were you trying to do and thinking about?

Mark Warkentin: The latter half of the qualification race was spent mostly just trying to hold onto the person next to me and pull draft as much as possible. I knew that I needed all the help I could get because I was tired, so I got really, really, really close to the guys around me and tried to swim just barely behind their shoulders to get maximum draft. I focused on my breathing, protected my face, and tried to keep my heart rate low. I remember that I didn’t do any sighting – looking forward – for the buoys up ahead during the second half of the race.

I just trusted that the guy in front of me was swimming straight. The only other thing I remember is pain. Lots and lots of pain. I wasn’t a very fast swimmer, but the lead pack was going as fast as I could possible handle. David Davies had taken us on a snake-like course for most of the race at an incredibly fast pace and I was exhausted. To this day, I still feel like the last 30 minutes of the 10 km in Seville was about as much pain I could possible endure.

Daily News of Open Water Swimming: During the last 400m of the race, what was going through your mind?

Mark Warkentin: Grant Hackett and I turned around the final turn buoy at the same time and we were somewhere between 6th and 10th place at the time. For whatever the reason Hackett tried to swim over me to get to my other side. I remember being totally disoriented and shockingly tired so I didn’t think much of it at the time. I later found out that Hackett got a red card for that move. I remember the adrenaline and pain mixed together.

Daily News of Open Water Swimming: As you hit the finish line in Sevilla, Spain, what was your first few thoughts?

Mark Warkentin: My first few thoughts at the finish line were fear and confusion. I knew I wasn’t in the top 5 and I knew that 10 guys had touched at about the same time I had touched. There was a solid 10 minutes where I wasn’t sure if I had made the Olympics or not. It wasn’t until [USA coach] Paul Asmuth said to me, ‘It looks good for you’ that I started to feel like the dream might become a reality. 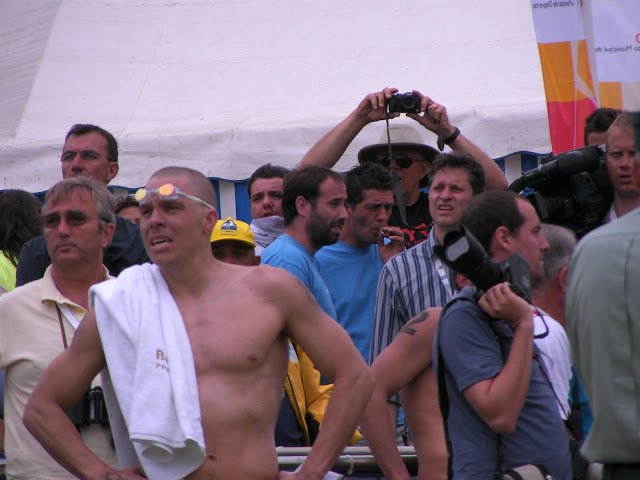 Daily News of Open Water Swimming: When you finally heard that you made the Olympics, what did you do?

Mark Warkentin: I cried. That was a really emotional moment. 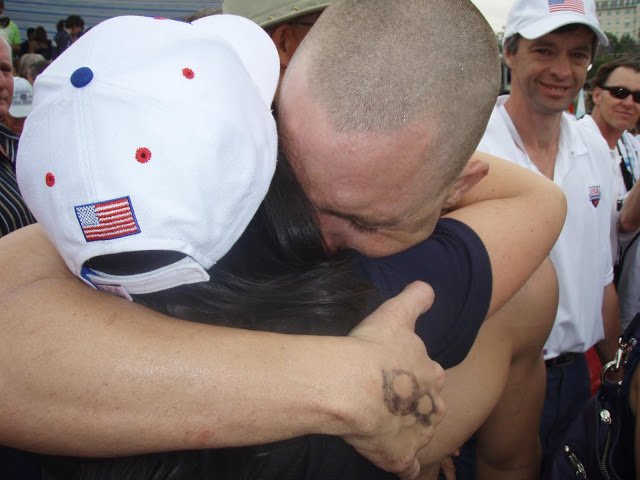 Daily News of Open Water Swimming: Once you qualified for the Olympics, did your training or mindset change?

I trained appropriately between Seville and Beijing, and I had some of the best training sets of my entire life. I got to do some great sets with Michael Phelps, Peter Vanderkaay, Ryan Lochte, Erik Vendt, Klete Keller and Larsen Jensen, but I don’t think I readjusted my brain properly. I had never been a top 3 guy at international competitions – I always finished between 6th and 8th – so in my mind jumping over 3 to 5 top tier guys and getting on the podium wasn’t something that I thought was possible.

I still regret that because the gold medalist Maartin van der Weijden was a good friend and we usually finished fairly close to each other at big races. Maartin wasn’t expected to win in Beijing, but after talking with him in the aftermath of the race it was clear that he thought he had a good chance.