Martha Hunt Jumps In To Save Lives In The Open Water 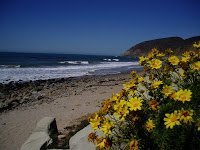 In a world where sports are entertainment and performed for fun, competition and health, it is always refreshing to realize how important swimming is.
This true story that happened in November 2010 is just one example of how compassion, quick-thinking and open water swimming can collide and result in a selfless act of heroism.
Martha Hunt and her cycling partner Rachel Hosmer were riding along the Southern California coastline when Martha’s open water swimming skills were unexpectedly called into duty.  “Rachel and I heard guttural screams as we headed south on Pacific Coast Highway by Deer Creek.”
“After realizing two offshore divers were in trouble, I quickly clipped out of my pedals, threw my cleats off, and had to slide down an embankment to get to the beach.”  There was not a moment of hesitation with Martha.  She threw caution to the wind and jumped immediately to action.
As Rachel called 911 for an emergency, it was a few minutes before Martha reached the first diver before she made her way down the slope, onto the sandy shore and out through the surf.  “As I was sliding down, I knew the divers might be desperate and lunge at me.”  She relied on her aerobic conditioning and calm nature as she moved towards the men.   “I truly gave myself a pep talk about remaining calm.  I knew I was doing the right thing, and did not contemplate waiting – or not acting.”
The diver closest to shore was the man who Martha and Rachel had heard crying desperately for help on their ride.  “As I approached the first diver, I told him he had to listen to my instruction and that he should take my arm when instructed.”  Martha’s ocean swimming skills were deployed without a thought.  “I was timing the next wave, while still standing in the surf, to hopefully pull him in with the force of the wave.  He was fairly obedient, but kept telling me to hurry and get his friend to safety as soon as possible.  I pulled him in with the wave, able to get him on all fours and where he would not be swept back in with the undertow.”
With one man safe onshore, Martha knew the second half of this rescue was going to be tough.  He was in deeper water, in the surf with a waterlogged wetsuit and clearly in a more desperate condition.  “I knew the next rescue wasn’t going to be as graceful and easy.  The diver still had his tank on, had been trying to get it off his back, and had compromised the seal of his wetsuit.  Water had filled up inside his suit.  He looked as if he had been in and out of consciousness.”
But Martha remained cool and kept moving and thinking with only one goal in mind: to save lives.  “I told [the second diver that] he had to listen to me and I would get him out of the water.  He looked to be in shock, his face white, his body was limp.”
Her composed manner and focus was perfect for the situation in the cold, turbulent waters of the Pacific.  “I kept telling him I was going to help him, that he was going to be okay.  I used the same approach, telling him to take my arm.  He was further off the shore than the first diver had been, so it meant fully immersing myself into the water, and using more of the classic lifesaving technique I had learned over 35 years ago.”
As they bobbed through the surf, time was of the essence.  “My adrenalin was way too pumped for me to feel any kind of defeat.  Although he wasn’t lunging at me, the surf was rough.  The waves were crashing, and I couldn’t get him to where I would be able to stand.   We were both knocked by a big wave, and before I could start to panic, I looked and saw five more cyclists running in my direction.   Rachel had flagged them down and directed them to me.  It took all of us to get him out of the water.  As we were getting him out, I kept instructing the others to lie him on his left side.  All the while, I was talking to him, telling him he was going to be okay.  He was vomiting water, and strange noises were coming from his mouth.”
The diver he had swallowed quite a bit of water, but the paramedics were on their way. Martha’s fitness were still shaving minutes of valuable time that could have been lost.  “As the fire truck came rolling up, I ran up a flight of stairs that were nearby and answered questions for the paramedics.”  The two divers were then treated by the firemen and paramedics and are alive to enjoy another day.
But Martha and Rachel were still with their bicycles and got on with their workout.  Martha, wet and sandy but relieved, was absolutely glowing during her 40-mile ride back.  “I was warm from the ride, but warm, cold, summer, winter…nothing mattered.  I truly experienced that ‘fight or flight’ response.  Nothing was going to stop me from helping these divers.”
“I did consciously choose the first diver because the rescue looked easier and I thought it best to start with him.  I knew the second rescue was going to be difficult.  It felt incredible to save the two divers in trouble.  I was clearly enjoying the adrenalin rush for several hours.  I kept laughing to myself, in utter disbelief of what had actually happened.  It was truly an indescribable feeling, but the next morning, it felt like I had been in an automobile accident.  My neck, shoulders, and arms were so incredibly sore.”
Sore, cold and sandy … happy, indescribable and euphoric … all part of the deal when Martha, Rachel and others made a selfless heroic safe in the cold, rough waters of the Pacific Ocean.