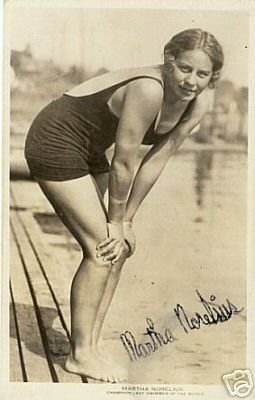 Martha Maria Norelius is one of those dual inductees. She passed away at a young 44 years (1911-1955) after a surgery, but the Swedish-born American swimmer certainly made the most of her time in the water.

At the 1912 Stockholm Olympics, he was offered a position in Florida to train the American swimming team.

His daughter became good friends with Johnny Weissmüller also trained under him. Both Weissmüller and Norelius represented the USA at the 1924 Paris Olympics where she won the gold medal in the women’s 400-meter freestyle, setting a new Olympic record (6:02.2) at the age of 15. She beat fellow Americans Helen Wainwright (6:03.8) and Gertrude Ederle (6:04.8) in her Olympic debut.

She was suspended from amateur competition in 1929 because she gave an exhibition in the same pool with professional swimmers, so she turned professional and won US$10,000 in the 16 km (10-mile) Wrigley Marathon in Toronto in her open water debut to leave quite a legacy in the water.