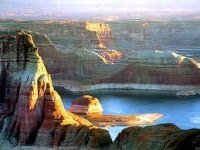 The day before the Midmar Mile in Pietermaritzburg, South Africa, guest swimmer Martin Strel spoke to a full house about his big river swims in the Amazon, Yangtze, Danube, Parana and Mississippi rivers as well as his 84 hour 10 minute non-stop solo swim in the Danube.

He spoke how he faced anacondas, bull sharks, crocodiles, piranha that took chunks of skin out of him, pirates, Class III and Class IV rapids, logistical difficulties, helpful locals, and a variety of tropical diseases.

He talked about many of the cooperative politicians and administrators with whom he as met in the 151 countries where he has swum. With a broad Slovenian smile, he took the stage and introduced himself as “I am Martin Strel…still alive.”

In painting a general overview of his expeditions, he gave credit and praise to his support personnel including his medical team, communications team, security team and kayak team. “First, you must find a really good team. They must deal with being on the same boat for three months, surviving diseases and pirates.”

When he was told over and over again that he should go home, forget his adventures and that he would die if he tried swimming the Amazon or Yangtze Rivers, he said, “I decided to risk my life. I wanted to show the world that everyone can achieve their own dreams with hard work and dedication. But it was hard. Very, very hard. I was gambling with my life. For example, piranha bit me every day in the Amazon. Thousands and thousands of them were all around me, but my team learned to redirect them with buckets of blood thrown in the water.” Martin explained the hardest parts of his swims. “It was the first week. Can you imagine having to organize everything and swim every day with only 2 or 3 hours of sleep? One day, OK. Two days, maybe. After three days, you are swimming like a dead man. After one week, it is very difficult. But I had to continue and pushed my body. Your mind must be tough.

You have to be very busy in your mind. Because swimming one hour in the water is not like running one hour on land. You cannot talk, you can only think. I am thinking about my favorite stories, my family and many many things. But when you are busy in your mind, you will question yourself. You will think how difficult your swim is. But you have to finish each day; you have to finish the swim. Only on the last day, can I celebrate
.”

He explained a trick to overcome his fears and his need to swim despite a severe lack of sleep. “I can hypnotize yourself. I once swam for 4 days and 3 nights non-stop. [Including the pre-swim and post-swim activities], I did not sleep for 105 hours. I can do it – and you can do too. If I fall asleep on my long swims, my crew knows not to wake me up. I swim a little crooked and sometimes, I even swim the wrong direction, but I always am moving forward.

On the long swims, I was like a father of a team of 22 people. I had to manage people in the boat. They had problems. They got homesick. They wanted to talk to their wives, so I let them use our satellite phone. They got diseases and had to go to the hospital. But I needed them to watch me 100% of the time. Their eyes must be on me all the time. They had guns, knives, machetes, whistles. They had to protect me from debris and whirlpools and piranha – and even sometimes dead bodies in the river,” Martin explained as he showed a video of the cadaver in the river beside him.

With his arduous swims behind him, Martin smiled all week long during Midmar Mile week. He took photos with swimmers, he signed books, he showed videos of his swims, he counseled people on tropical diseases and he encouraged them non-stop. “Our aim is to get more people swimming outdoors and enjoying what nature has to offer,” explained his son and lead guide Borut. “Swimming in the open water is an exhilarating experience which can be enjoyed in diverse locations all over the world. My father and I have experienced some of the most beautiful and dangerous swims in the world, but each person has their own level of experience and abilities. Whether you are an experienced swimmer or someone who simply wants to try something different, Martin has encouraged people all his life to swim. Swimming is a great lifestyle.”

Photo above is of Lake Powell where Martin was filmed for an upcoming television program and where he runs adventure swimming tours.