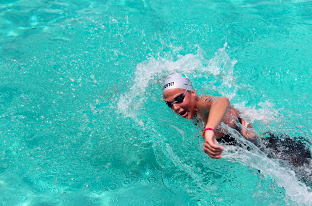 Courtesy of International Marathon Swimming Hall of Fame and WOWSA with Martina Grimaldi in Cozumel, Mexico.

She discussed her career in her native Italian [along with the translated English]:

Daily News of Open Water Swimming: What was your most memorable swim or race of your career?

Martina Grimaldi: La mia gara più memorabile sicuramente la 10 a Londra per Olympic Games…dove ho conquistato il bronzo. [My most memorable race was the 10 km in London at the Olympic Games…where I won the bronze medal.]

Daily News of Open Water Swimming: Can you describe your typical mid-season weekly schedule, including your swimming workouts and dryland training?

Daily News of Open Water Swimming: What are some of the most beautiful beaches where you have swum?

Daily News of Open Water Swimming: Who were your coaches during your careers?

Daily News of Open Water Swimming: What are your favorite foods and drinks during your marathon races?

Martina Grimaldi: Durante le gare uso più sali e maltodestrine e cheerpak di Syform. Però la mattina prima della gara difficilmente rinuncio alla Nutella. [During the races, I use more salt and Maltodextrin, but in the morning before the race, I rarely give up on Nutella.]

Martina Grimaldi: Per ora non ho obiettivi anno per anno decido cosa fare in questi anni mi sono tolta molte soddisfazioni finché mi divertirò,continuerò a nuotare. [For now, I have no goals year after year. I decide what to do in these years. I am satisfied as long as I am enjoying the sport and will continue to swim.]

Martina Grimaldi: Durante una gara devo dire che sono molto concentrata sulla gara perché devo stare attenta a molti fattori correnti onde possibili fughe da parte di qualche avversaria. [During a race, I have to say that I am very focused on the race itself because I have to be attentive to many current factors so another swimmer can escape from the pack.]

“Martina is a threat to win every race that she enters, from 1 km to 25 km in both domestic and international races. She was on the podium 24 times out of the 53 times she has raced to date. The two-time Olympian is literally always in the lead pack and can race with anyone and everyone in all conditions – warm or cold, calm or rough, salt or fresh,” said Steven Munatones. “She is tactical and she is blazing fast and has been a stalwart on the national Italian team for over a decade. It is rare for an open water swimmer to be given a national honor like Martina was with her Cavaliere della Repubblica, Knighthood in the Kingdom of Italy.”

“Martina and the other new members of the International Marathon Swimming Hall of Fame emulate those exceptional 269 forerunners already enshrined in the Hall of Fame. Since the class of 1963, our marathon swimming inductees from around the world have received the ultimate marathon swimming recognition. They have been immortalized with their names inscribed on the IMSHOF Sea Goddess, our ‘symbol of the sea’,” explained Chairman Christopher Guesdon.