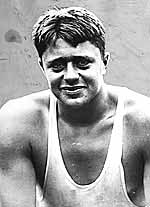 Olympic champion Michael Phelps is renowned for working out extraordinarily hard while eating 12,000+ calories per day.

Back in the 1930s, International Marathon Swimming Hall of Fame Honour Swimmer Marvin Nelson was the Michael Phelps of his era.

After the 1933 Canadian National Exhibition race in Toronto, Canada, reporter Ted Reeve wrote, “Nelson’s performance was remarkable when it is considered that nervousness before the race upset his stomach so much that in the morning [of the race], he could only nibble away 4 bowls of porridge, 6 poached eggs, 14 slices of bread, 3 oranges, a quart of chocolate, a quart of milk and a pound-and-a-half of steak.

After Nelson won his third Canadian National Exhibition race by 1934, he wanted to try a two-way crossing of the English Channel…at a time when only 21 people had successfully crossed the Channel in one direction.*

He wanted to attempt a two-way English Channel crossing, a swim never before accomplished. Incredibly, he raised US$25,000 against 50-to-1 odds, that he would be successful.

But as there was only five Channel swims between 1935 and 1947 (by Haydn Taylor, Thomas Blower, Bruna Wendel-Plarre, Fernley Wheatcroft, and Sally Bauer), and Nelson never got his chance to make Channel history.