Marvelous Marathon Memories Of A Mountain Of A Man 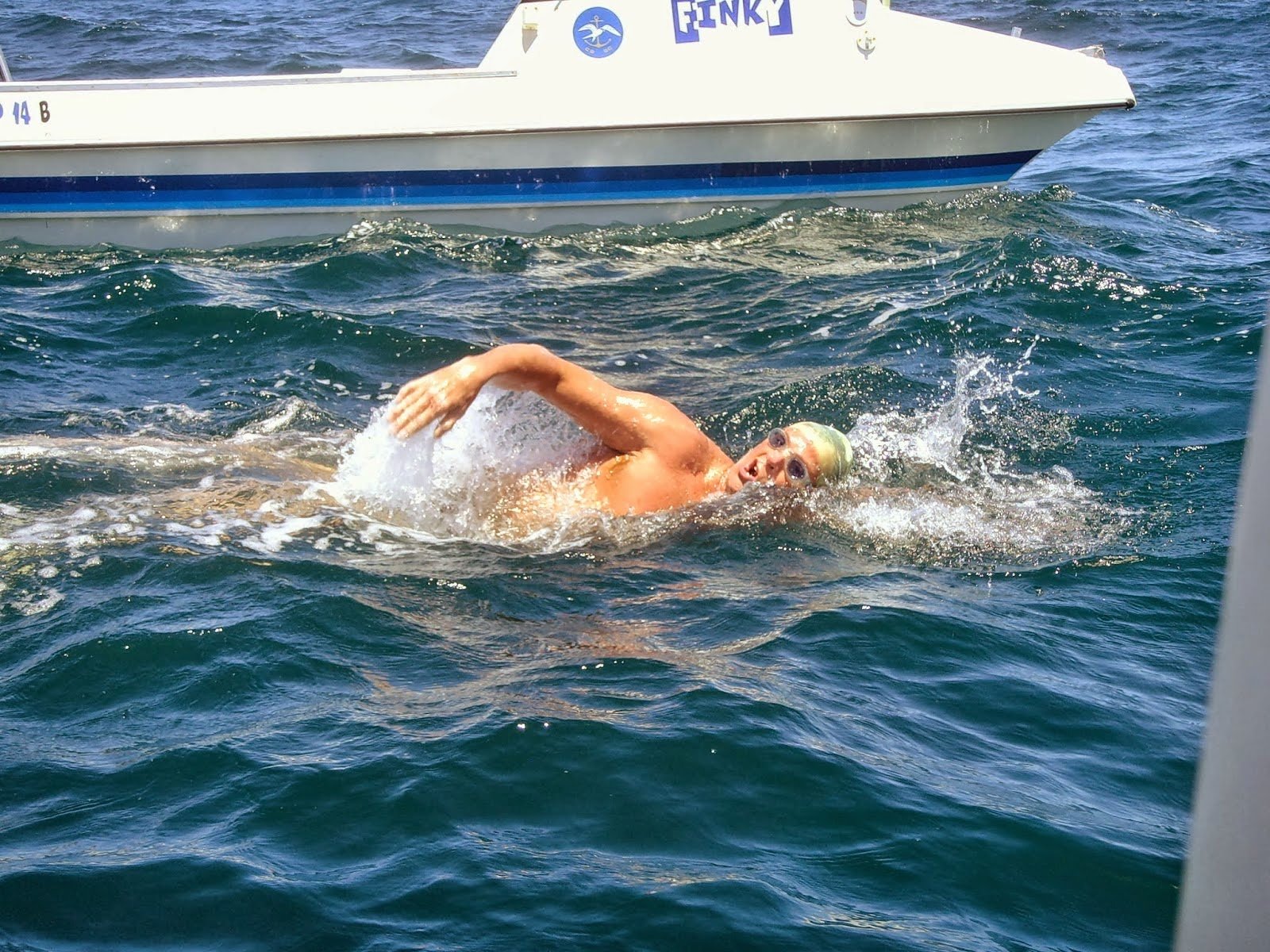 Towering open waterist Ned Denison was inducted in the International Marathon Swimming Hall of Fame in 2013. He recalls some of his most vivid memories over the course of his career:

“I had the perfect day…not a ripple. The best moment was coming on board afterwards, holding up 3 fingers for the Triple Crown of Open Water Swimming and learning that my time was faster than Barbara Held and Forrest Nelson, then smiling for the next 60 hours thru the IMSHOF induction ceremony.”

“I had a short-time window so I could not wait for a great day. I went on one that would start nice and freshen up later. Everything about that place is the focus on shark attacks so the mental pressure could have been overpowering. It turned out to be my best mental performance swim ever and physically I attacked the oncoming waves in the afternoon.

The best moment was having breakfast with Hugh Tucker, marathoner, observer and maker of a swimming shark cage for False Bay attempts, his wife Fran and Andy Pfaff when he declared that Andy’s English Channel crossing and my False Bay swim were the greatest he had witnessed in several hundred observations
.”

“I had no interest. I only did it because local English Channel soloer Finbarr Hedderman kept saying, ‘Ned doesn’t do cold,’ which I could live with until he, one day added, ‘Because he can’t.’ I beat him to it and was the first in Cork. The best moments were coming out and singing zippy do dah’ to Jackie Cobbell and Kevin Murphy, the witnesses and a few days later seeing Finbarr.”

“It was a special kind of bone-tired. It wasn’t so much the mile every hour. The night temperature went to 0ºC, the ground was covered in frost, and I had arrived with no support and a bag of odd food from the grocery store. The best moment was of my swimming friend and nemesis Rory Fitzgerald who did an extra 100 at the every finish with me.”

“Canyon Lake is one of the top 10 prettiest places I have ever been. It was a last-minute decision based on good friends Barbara Held and Roger Finch swimming. As an extra bonus, I spent 4+ days with swimming hero Gracie and great swimmers/organisers Dave Barra, Liz Fry and Greg O’Connor plus all the other swimmers and volunteers. The best moments were surviving the cliff climb down to Saguro, saving the day and simultaneously pleasing 27 women in Canyon when Greg O’Conner discovered he had no swimsuit and was going to swim naked and I had the only spare, in Apache where I stayed 100 meters ahead of Liz for the last 5 miles of 14 miles. She was the Terminator and never stopped coming. In Roosevelt, the nightmare continues to haunt me: Having gone up 3-0 on Dave Barra he announced that I was going down in the Roosevelt night swim. I finished and yelled in the dark, ‘Tell me Barra is still swimming’ and he softly replied, ‘I’m here’. AAAGGGHHHH.

The funniest moment of the year was when the oldest swimmer had come in last in the first 2 swims and made a move to pass a swimmer near the finish, but was discovered. He remarked, ‘The damn buzzards circling me, waiting for me to die, gave away my position.'”

Strait of Gibraltar, 14 km from Spain to Morocco

“It was the most fun. I swam in a group for 4, including 3 good mates escorted by my partner Catherine. Trevor was a marathon virgin and broke the Irish record and he is still smiling and we partied well.”

Round Jersey, 41-mile (65.9 km) circumnavigation of the Island of Jersey in the English Channel

“I had waited 3 years for this swim. It was the worst of the year. The day before was perfect and the record broken and I dreamed. My day was lumpy and I was puking from the first hour. The best thing was Charlie Gravett’s health had improved enough to pilot my swim.”

Cork to Cobh, 16 km swim held in the Port of Cork, Ireland

“It was my third time on that course and sixth time across the ferry path and the conditions were fantastic. The best moment was thinking about 16-year-old Owen O’Keefe in 2009 when we were swimming at 4 am in the dark in the same waters: rough, rainy and windy. And he went on to swim 25 km to Myrtleville, then the English Channel solo and at age 20 is one of the best open water swimmers in Ireland and a leader of the sport. I was thinking how proud I am of how he turned out.”

The best moment of the year was when Fionnuala Walsh, having been denied by the fog 100m from France in July, went back once in September and got weathered out, and then returned in mid-October to complete a rough ugly swim to join the English Channel solo club.

The worst moment of the year was the summer solstice swim to celebrate the life of our Paraic Casey who died in the channel in 2012. One lap of Sandycove Island bawling into my googles. The other 50+ swimmers went in and I did a second lap and found a bit of peace with good memories.