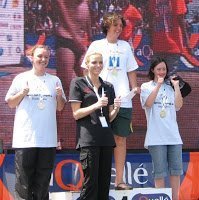 Courtesy of WOWSA, Midmar Dam, South Africa. The aQuellé Midmar Mile was recognized by the International Marathon Swimming Hall of Fame for being one of the world’s premier open water swimming events.

The event has so much as to defy description.

Not only is it the largest competitive swim in the world, but it also has the greatest amount of safety personnel and requires drug testing for its top prize-winning athletes. 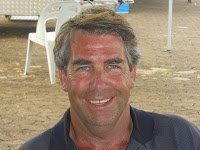 It has journalists from the television, print, online and radio media as well as world record holders and Olympic medalists participating from South Africa’s Roland Schoeman and Germany’s Franziska van Almsick as well as celebrities from real royalty (Charlene Wittstock) to swimming royalty (Penny Heynes) taking part in various roles. Charlene not only swam and gave out awards (see above), but she also helped raise £60,000 for Special Olympics South Africa.

“I’ll ask Prince Albert II to come join me next year in the race,” said the future princess of Monaco. “It’s been so great to be back in South Africa.” The logistics of getting 16,500 swimmers from start to finish and timing everyone accurately is mind-boggling and is a credit to Wayne Riddin (see above) and his professional staff and army of friendly volunteers. It offers a real safari for foreign visitors as well as a number of distances to compete: 1 mile, 2 mile, 3K, 10K and 25K over a 4-day period.

Additionally, numerous awards are given out including the annual Courage Award which was given to Joshua Grob from Johannesburg this year. “It was really cool meeting the princess and this is a lesson to everyone that they should never give up but give 100% in everything they do.”