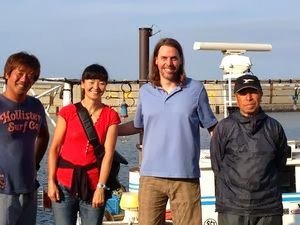 In a land far, far away in a language that few understand and even fewer can read, Masayuki Moriya’s Ocean-navi help dozens of swimmers navigate the Tsugaru Channel in Japan and many places around the Pacific Rim.

With the help of Yuko Matsuzaki and Captain Mizushima and a slew of hard-working volunteers, Ocean-navi has brought channel swimming to Japan and to the greater marathon swimming community around the world.

Ocean-navi was nominated for the 2013 World Open Water Swimming Offering of the Year for its unparalleled service in the English Channel of the Far East. Its nomination read, “The citizens of the island nation of Japan have always enjoyed and respected swimming. Its best swimmers have won Olympic gold. But Ocean-navi is elevating open water swimming to another level by introducing and guiding newcomers to the ocean, from Borneo to Hokkaido. Ocean-navi and Masayuki Moriya took 42 swimmers across the Tsugaru Channel and conducted numerous ocean swimming tours for masters and triathletes in 2013. Ocean-navi is making open water swimming fun and educational, not only for native Japanese but also for visiting foreigners interested in a land shrouded in mystery, cloaked in unknown customs with an indecipherable language. For its efforts to help swimmers tackle the Tsugaru Channel, for its efforts to conduct open water swimming tours, camps and clinics in a fun learning environment, Ocean-navi’s services are a worthy nominee for the 2013 World Open Water Swimming Offering of the Year.

And crossing the Tsugaru Channel is not as easy as it appears with a short 19.5 km distance between Honshu and Hokkaido. Its winds are fierce and its eddies are wholly unpredictable and changing hourly. Given the jigsaw contours of the two islands, the turbulent eddies cause all kinds of frustrations for swimmers who come in overly confident.

Comparing the times of the channel crossings of the 14 swimmers who have crossed the 21-mile English Channel, the 20.2-mile Catalina Channel and the 12-mile Tsugaru Channel, the average times are comparable:*

The nominees for the World Open Water Swimming Offering of the Year includes a variety of products, services and concepts: